The COVID vaccines do not genetically modify your DNA, but Juno’s patented CAR T-Cell therapy certainly does. Sloan Kettering owns U.S. patent No. 7,446,190 and Juno (BMS) is the exclusive licensee.  The patent claims a nucleic acid polymer (DNA/RNA) that encodes for a particular “chimeric T cell receptor.”  The idea here is part of a revolutionary CAR T-Cell therapy that genetically modifies a patient’s own T-Cells so that it will be able to recognize (and thus attack) specific antigens.  The inventors have been awarded numerous accolades for showing that this approach works to treat some lymphomas.  Kite’s “YESCARTA” therapy was found to infringe.

The jury awarded the patentees $1.2 billion for Kite’s infringement.  On appeal, the Federal Circuit has reversed — finding the claims invalid for lack of written description.

Functional Binding element: The claims are directed to DNA (or some other nucleic acid) coding for a “binding element that specifically interacts with a selected target” in the form of a single chain antibody.  But, the patent does not actually disclose the DNA sequence of such a binding element.  That failure led the court to find that the claim lacks written description.

The patent does disclose a couple of single-chain antibody fragments that work (and their binding sites): one derived from the “SJ25C1 antibody” that binds to B-cell lymphoma cells; and another derived from the “J591 antibody” that binds prostate cancer cells.   The patent explains how those were obtained used, but does not disclose the amino acid sequence of either of these antibodies or their coding nucleic acid sequence.

The basic written description question is whether the functionally claimed “binding element” genus is sufficiently supported by the two examples provided in the specification. 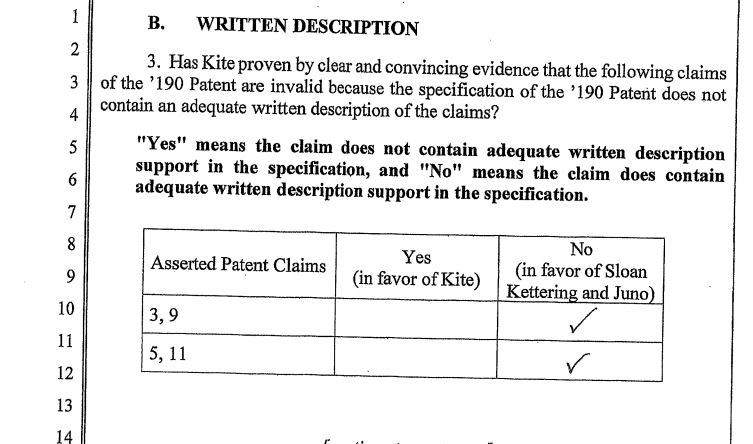 Written description is a question of fact, and the jury sided with the patentee — finding invalidity had not been proven with clear and convincing evidence.  The district court supported that ruling and denied Kite’s renewed JMOL motion.  On appeal though, the Federal Circuit flipped the verdict — holding that “no reasonable jury could find the ’190 patent’s written description sufficiently demonstrates that the inventors possessed the full scope of the claimed invention.”

Full Scope Written Description: The Patent Act requires that the specification include “a written description of the invention.” 35 U.S.C. § 112*(a). The specification needs to convey that the inventor had “possession” of the claimed invention as of the patent application’s filing date.  Written description  regularly arises with regard to genus claims — claims covering multiple embodiments.  In that situation, the court is looking for possession of the “full scope” of the invention as claimed.  Typically this involves disclosure of “either a representative number of species falling within the scope of the genus or structural features common to the members of the genus so that one of skill in the art can ‘visualize or recognize’ the members of the genus.” Ariad.  The test is even tougher for functionally-defined genus since structure cannot be derived from the claim language itself.

Here, the court found that the patent provided “no details” about specific embodiments beyond “an alphanumeric designation, SJ25C1, as the source”, and no “general characteristics that would allow” the binding portion to operate.

Without more guidance, in a vast field of possible CD19-specific scFvs with so few of them known, no reasonable jury could find the inventors satisfied the written description requirement.

Slip Op. During the trial, the patentee’s expert witnesses provided explanations regarding how the approach here has facilitated multiple CD-19 specific antibodies to be used as the way claimed by the inventors.  On appeal though, the court reminds us that written description must be shown in the patent document istelf — not based upon post-solution activity. “Dr. Sadelain’s testimony about post-priority date developments, therefore, is irrelevant to the inquiry before us.”

The case does not go into this, but the original application here is a copy of the nature biotechnology article published by the inventors in January 2002 along with 1-page of text all filed in May 2002. [Provisional App: 52334_60383872].  The issued claims are almost identical to those in the non-provisional filed in May 2003.