Editor’s Note: Avery Welker is a 2L at Mizzou and likely a future patent attorney. He authors a series linking law school canonical cases with intellectual property counterparts. You can email ideas for future posts to avery@patentlyo.com.  – Dennis Crouch

My Civil Procedure I outline turned out to be the longest outline of my first law school semester. Personally, I was betting on joinder and class actions to contain the most notes throughout the semester. As it turned out, discovery took the “most notes” crown. That makes sense – there’s a lot to discover in a lawsuit! Upon review of my outline, some of these rules started to come back to me.

That includes, of course, Rule 26, which outlines discovery generally and contains rules on the duty to disclose.[1] Wrapped within Rule 26 are details about expert testimony.[2] While Rule 26 didn’t end up wholly dispositive of this lawsuit, it certainly was the final nail in the coffin for an inventor’s testimony through the course of Pandrol USA, LP v. Airboss Railway Products, Inc.[3]

This appeal arose from a summary judgment grant to Pandrol[4] (Plaintiffs-Appellees) over Airboss[5] (Defendants-Appellants), declaring that Airboss failed to show clear and convincing evidence of patent invalidity.[6] 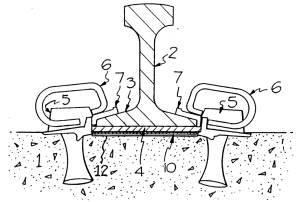 One issue in the appeal centered on the testimony of the ’046 Patent’s inventor, Hartley Young.[9] Normally, an inventor testifies on behalf of the patentee. However, by the time of this lawsuit, Young had taken a job with the defendant, Airboss, and submitted a declaration supporting his new employer’s contention that the patent was invalid.[10] At the district court level, assignor estoppel quickly put a stop to that testimony.[11] The Federal Circuit agreed and noted that exclusion of the inventor’s anti-patent testimony was justified based on “unfairness and injustice.”[12]

Where Rule 26 comes into play is the rest of the testimony.[13] Under Rule 26(a)(2), Airboss was required to file an expert report for Young’s declaration because the declaration contained .[14] This declaration contained Young’s opinion on the patent specification interpretation to be used on other issues in the trial.[15] The district court noted that Young’s testimony falls under Federal Rule of Evidence 702 and requires an expert report.[16] On appeal, the Federal Circuit agreed. Even though Young was an inventor and thus a potential fact-witness, his declaration also “contains expert opinion because he opines on claim construction and interpretation of the original application.”[17]  In the end, the Federal Circuit affirmed district court’s exclusion of Young’s testimony on both the assignor estoppel and Rule 26 grounds, thus putting the final nail in his testimony.[18]

With Young’s testimony excluded entirely, clearly, that evidence could not come in. Many can speculate on what the outcome of this case would have been including Young’s testimony. No doubt that information from the inventor himself would be very relevant and accurate as to factual issues! However, one bullet point in my notes on expert witnesses lays out the base reasoning for this rule: “Essentially making sure experts are qualified and aren’t using ‘quack science.’”

Rule 26 certainly has plenty of moving parts. The overarching tools of discovery have many checkboxes and procedural steps to jump through. Sometimes I wonder how I kept it all straight on my final exam last year!

4 thoughts on “Law School Canons: It’s a Pain to Opine”