This is the second post in a series about our new research project on mandamus practice in the federal courts of appeals generally and the Federal Circuit’s peculiar use of mandamus in patent cases specifically.

While Westlaw is a terrific resource, one of its big limitations for empirical research is that it doesn’t necessarily contain all dispositions.   We confirmed that almost all of the granted petitions from recent years are on Westlaw, but a portion of the other terminations are not. 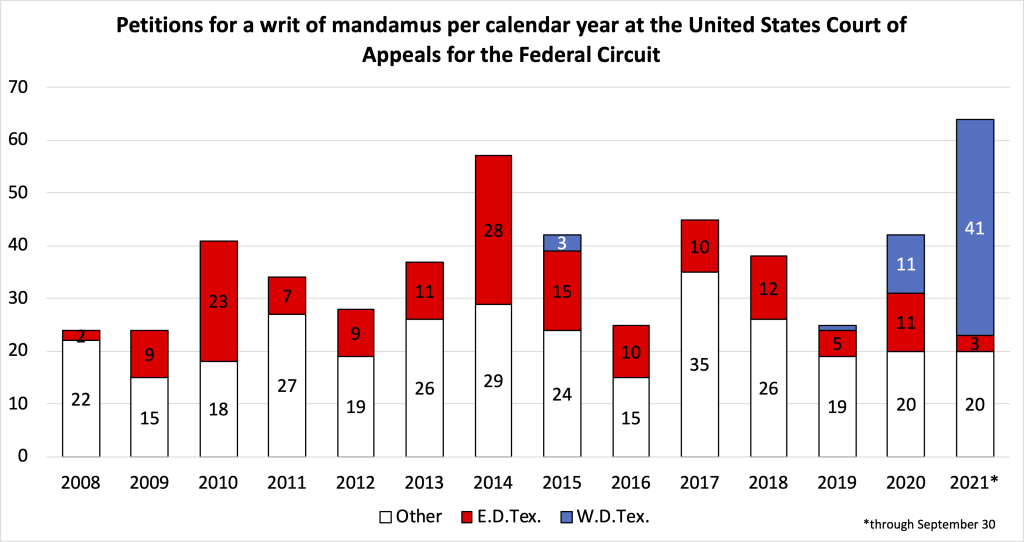 The next thing we looked at were outcomes. For this, we switched to looking at the data on a per-document level rather than a per-docket level.  By “document,” we just mean the opinion or order deciding the appeal or petition. For petitions for writs of mandamus, the results are essentially the same when examined at the per-docket level because very few orders decided multiple petitions.

Overall, the Federal Circuit’s grant rate in merits determinations (those that granted, denied or granted in part a petition) was 15% over the period from 2008-2021—that is, the Federal Circuit granted the petition in whole or in part in 58 of the 384 total decisions on the merits.  For an “extraordinary” form of relief, we were surprised at how high this was.

To investigate grant rates further, we started by comparing the grant rates of petitions for a writ of mandamus when the petition originated from a district court to the grant rate for other origins.  Figure 2 shows the outcomes on a per-document basis for 2008 – September 2021.  The top pie charts show the outcomes of merits determinations, while the bottom bar graphs show the other types of dispositions of these petitions.  Most other dispositions consist of voluntary dismissals, but there are also dismissals for lack of appellate jurisdiction and other reasons. 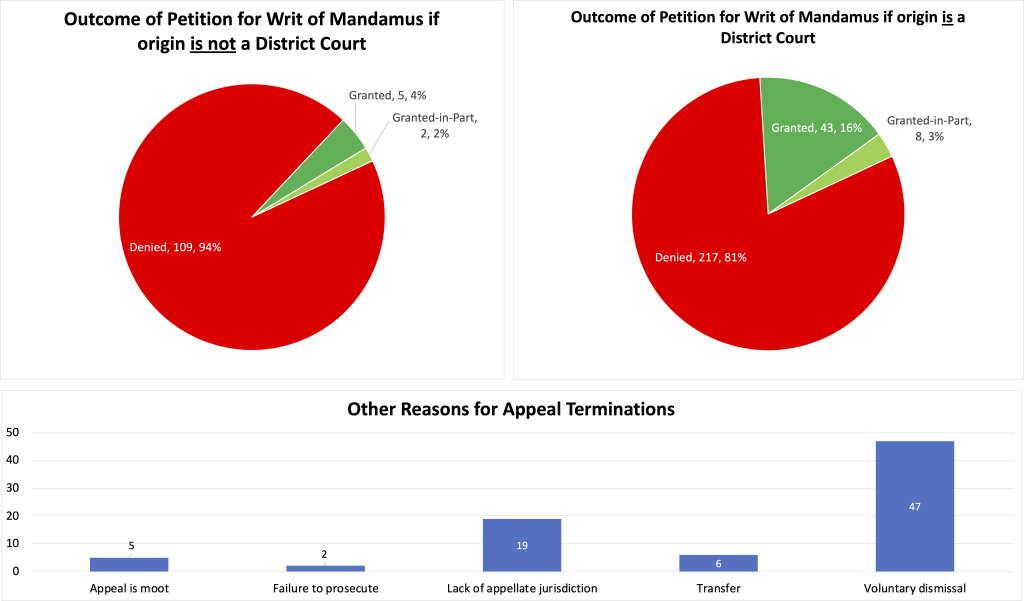 To examine what was going on, we conducted preliminary issue coding to identify those decisions involving some issue relating to venue (all of which originated from a district court).  Figure 3 shows the outcomes for merits decisions when venue was and was not at issue in the decision.

Put another way, for petitions for a writ of mandamus involving an issue other than venue, the grant of a writ of mandamus is a rare event.  But when venue is at issue, the court has granted petitions at a much higher rate.  But is this historically the case or is it a recent event?  In our third post we’ll conclude with additional detail on what’s going on with mandamus on transfer of venue issues at the Federal Circuit.

6 thoughts on “Extraordinary Writ or Ordinary Remedy? Mandamus at the Federal Circuit – Part 2”