The biggest story in patent law over the past three years has been the emergence of the Waco Division of the Western District of Texas as the undisputed capital of U.S. patent litigation. The lone district judge sitting in Waco, Judge Alan Albright, has engaged in an extensive campaign to entice patentees to file suit in his courtroom. And those efforts have succeeded. In 2016 and 2017, the two years before Judge Albright took the bench in 2018, the Waco Division received a total of five patent cases. In 2019, 217 patent suits were filed in Waco. In 2020, that number increased to 761—more than the number of patent cases filed in any other district court in the country and over 20% of patent cases filed nationwide. Judge Albright is on track to receive well over 700 cases again in 2021.

Most patent suits in Waco are filed by NPEs and involve computers and communication technology. Judge Albright’s courtroom is particularly attractive to NPEs because he moves cases quickly through litigation and his procedural rulings tend to favor patentees—both of which increase patentees’ leverage during settlement negotiations. Quicker settlements for larger amounts allow NPEs to more rapidly move on to their next target.

Not surprisingly, many defendants sued in Waco try to escape. The primary mechanism they use is 28 U.S.C. § 1404(a), which permits a district judge to transfer a case to another district (or to another division within a district) “[f]or the convenience of parties and witnesses, in the interest of justice.” In his three years on the bench, Judge Albright has developed a reputation for being less likely to transfer cases than other district judges. But as we, along with Jason Rantanen, discussed in a series of recent posts, the Federal Circuit has begun to push back, repeatedly using the extraordinary writ of mandamus to overturn decisions by Judge Albright denying transfer under § 1404(a).

The Federal Circuit’s interventions raise an interesting question: Does Judge Albright care? In an order issued earlier this week, he granted a defendant’s motion to transfer a case from the Western District of Texas to the Northern District of California, but not before criticizing appellate precedent on transfer as inconsistent and “out of touch” with modern patent litigation. But what do the numbers look like? Has Judge Albright become more inclined to transfer in the wake of the Federal Circuit’s mandamus grants? Or is he stubbornly refusing to change his approach?

As part of our on-going research on patent litigation in the Western District of Texas, we have collected all of Judge Albright’s orders deciding § 1404(a) motions that are publicly available. Interesting trends emerge when comparing Judge Albright’s grant rates to the Federal Circuit’s interventions through mandamus.

Overall, Judge Albright has decided sixty contested motions to transfer cases away from the Western District of Texas under § 1404(a) (excluding orders granting transfer after the Federal Circuit granted mandamus and orders involving contractual forum selection clauses). He has granted sixteen of those motions, for a grant rate of 26.7%.

Figure 1: Judge Albright Decisions on Contested Motions to Transfer Away from the Western District of Texas Under § 1404(a) 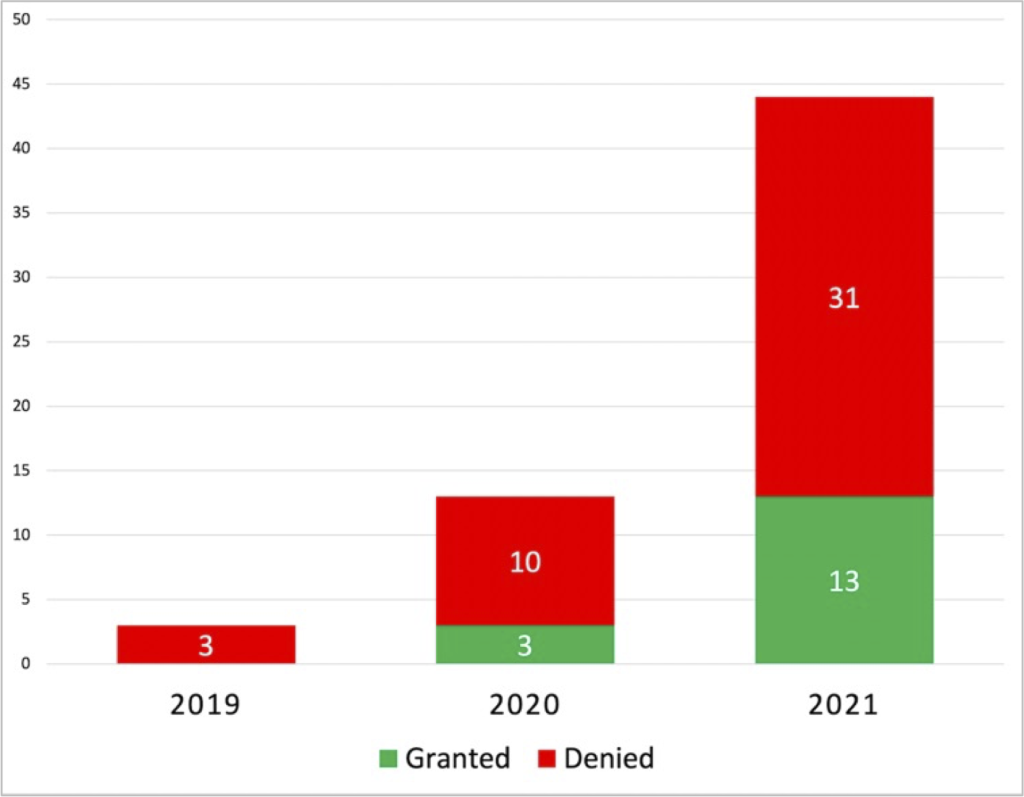 Looking at the numbers year-by-year, as in the figure above, it looks like Judge Albright’s transfer rates have changed over time, but not too much. Judge Albright decided only three § 1404(a) motions in 2019, his first full year on the bench, and denied all three. In 2020, he decided thirteen § 1404(a) motions, granting three and denying ten, for a grant rate of 23.1%. So far in 2021, he has decided forty-four § 1404(a) motions, granting thirteen and denying thirty-one, for a moderately higher grant rate of 29.5%.

Figure 2: Judge Albright Decisions on Contested Motions to Transfer Away from the Western District of Texas Under § 1404(a), Before and After In re Adobe

As the figures above indicate, before Adobe, Judge Albright had decided fifteen motions to transfer under § 1404(a), granting two and denying thirteen, for a grant rate of 13.3%. Since Adobe, he has decided forty-five motions to transfer under § 1404(a), granting fourteen and denying thirty-one, for a grant rate of 31.1%. Taking the Adobe decision as the critical date (between Adobe and Apple, Judge Albright decided only one contested § 1404(a) motion, and he granted it), it appears Judge Albright is clearly more willing to grant transfer in the wake of Federal Circuit skepticism about his decisions.

One final way of slicing the data: of the fourteen Federal Circuit grants of mandamus overturning transfer denials by Judge Albright, ten have occurred in the past four months, since June 30, 2021. Before the recent avalanche of mandamus grants began, Judge Albright had decided thirty-six § 1404(a) motions, granting seven and denying twenty-nine, for a grant rate of 19.4%. Since June 30, he has decided twenty-four § 1404(a) motions, granting nine and denying fifteen, for a noticeably higher grant rate of 37.5%.

Figure 3: Judge Albright Decisions on Contested Motions to Transfer Away from the Western District of Texas Under § 1404(a), Before and After June 30, 2021

Moreover, even the 37.5% grant rate over the past few months is low compared to the grant rates in other districts with large dockets of patent cases, which hover around 50%. (We’re working on updating the transfer data for other districts and will share our results in the near future.) And, don’t forget, given the nature of patent litigation and the West Coast-based parties typically involved (Google, Apple, Microsoft, and Amazon are all among the most common defendants in cases before Judge Albright), we would expect to see significantly higher transfer rates in cases filed in Waco, Texas, as opposed to cases filed in, say, the Northern District of California.

So, how did it start? It was pretty hard to obtain transfer away from Judge Albright’s Waco courtroom. How’s it going? Still not easy, but not impossible. Time will tell whether the Federal Circuit’s interventions through mandamus will be sufficient to combat the unhealthy court competition that is causing patent cases to pile up in Waco. But, given the case-by-case nature of the writ, the nominally deferential standard of review, and the expense of pursuing an interlocutory appeal, count us as skeptical that mandamus is anything more than a band-aid for well-resourced defendants to challenge the most obviously incorrect transfer decisions by Judge Albright.

24 thoughts on “Guest Post: How It Started…How It’s Going: Venue Transfers in the Western District of Texas”