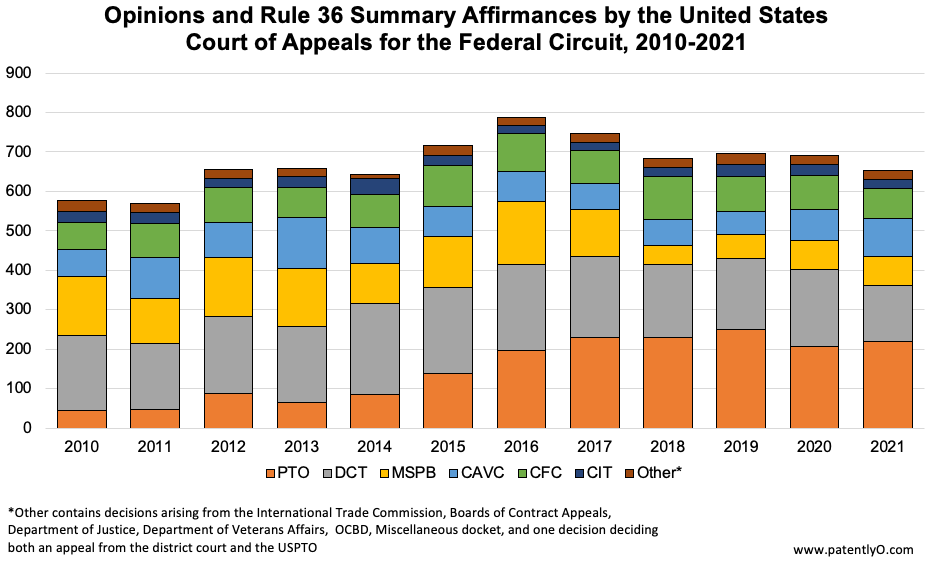 Figure 1 shows the number of Federal Circuit opinions and Rule 36 summary affirmances by origin since 2010. Once again, the highest number of merits terminations arose from the PTO. The most notable change for 2021 was a drop in the number of decisions arising from the district courts: from 197 in 2020 to 142 in 2021. These represent individual documents (i.e.: a single opinion or Rule 36), not docket numbers, but there’s also a 25% drop when looking at the data on a per-docket number basis.  Overall, the Federal Circuit issued 653 merits decisions in regular appeals in 2021 as compared with 690 in 2020. 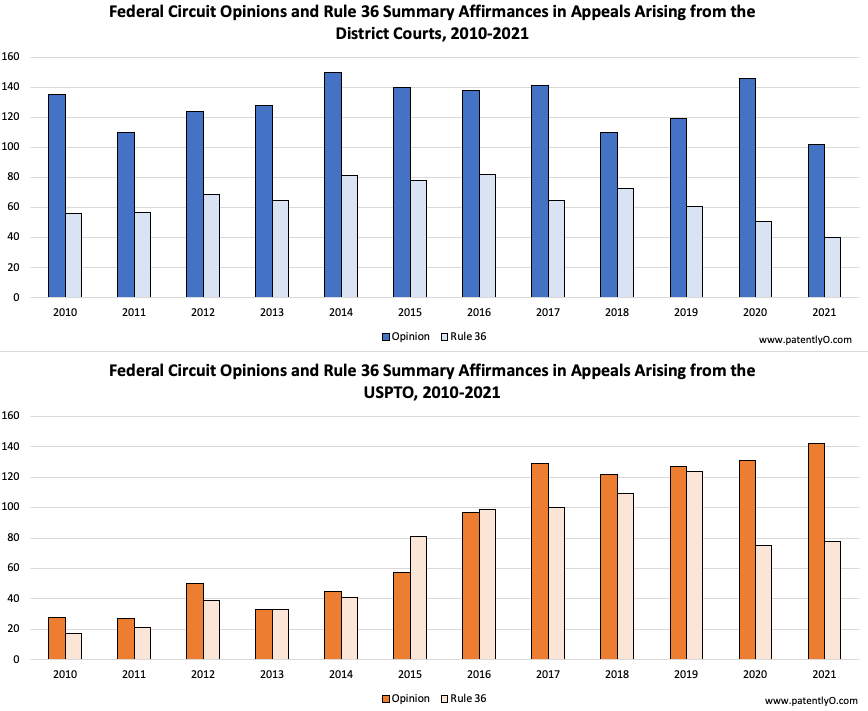 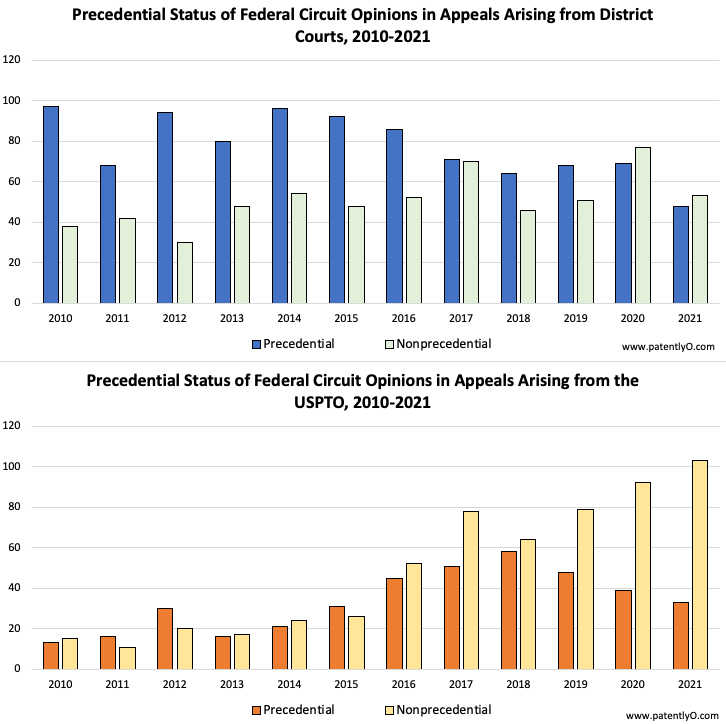 Interestingly, this does not seem to mean that affirmance rates in appeals arising from the PTO are increasing. For one thing, they’re already quite high: over the past decade, the Federal Circuit has affirmed the PTO about 80% of the time.  Nor did they increase in 2021. Last year, the Federal Circuit affirmed the PTO in 78% of its decisions. Another observation is that even though the court’s use of Rule 36’s in appeals arising from the PTO has dropped over the past two years, its affirmance rate has remained about the same. 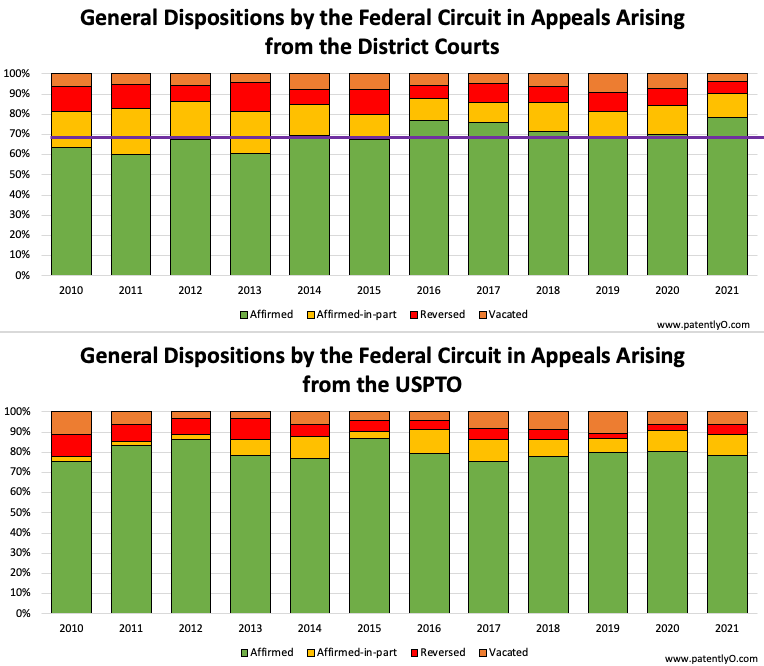 The Federal Circuit did, however, affirm district courts more frequently last year than any previous year.  The average rate at which the court affirmed-in-full district courts from 2010-2021 was 69% (indicated by the purple line); last year its affirmance rate in these appeals was 79%. 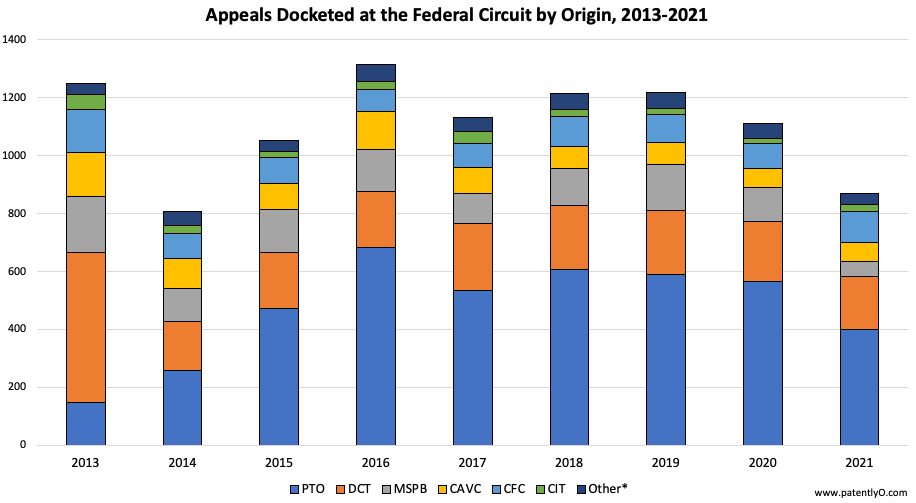 A new addition this year is a dataset of all Federal Circuit dockets since 2000 based on data from PACER. Figure 5 shows the number of appeals docketed at the Federal Circuit by origin. For the past few years, the court has received well over a thousand appeals per year. That number fell a lot in 2021—especially appeals arising from the PTO and the MSPB. (The MSPB has not had a quorum since 2017, and has not had any sitting members since 2019.)  The downstream consequence of this is that we can expect to see fewer Federal Circuit decisions in appeals arising from the PTO in 2022.

You can access the full document dataset here and generate a variety of charts using the widget, or download the data and plug it into your favorite analysis program.  In addition, both the docket and document dataset are archived on the Harvard dataverse, along with the Stata code for generating the tables for the above graphs.  Methodological details are provided in this working paper. Or, if there are specific aspects of the data that you’re curious about, email me or DM me on Twitter and if I’m able to, I’ll take a look.