According to the USPTO, there are a couple of hundred patent applications still pending that were filed prior to the June 1995 patent term transformation (GATT).  Of those, 99% list Gilbert Hyatt as an inventor. Hyatt is known for being tenacious. He does not give up easily.  But, his filings argue that the USPTO is largely to blame for the delays.

In particular, Hyatt provided testimony of various former PTO officials of a no-patent-for-HYATT policy — “a secret agency policy to block issuance of his applications as patents, regardless of the merits of his patent claims.” The PTO created a Hyatt Unit of examiners who repeatedly referred to Hyatt as a “submariner” and tracked Hyatt applications using software they called the “submarine detector.”  The group apparently distributed the shallow-fake image below depicting Hyatt applying Ted DiBiase’s finishing move – the Million Dollar Dream. 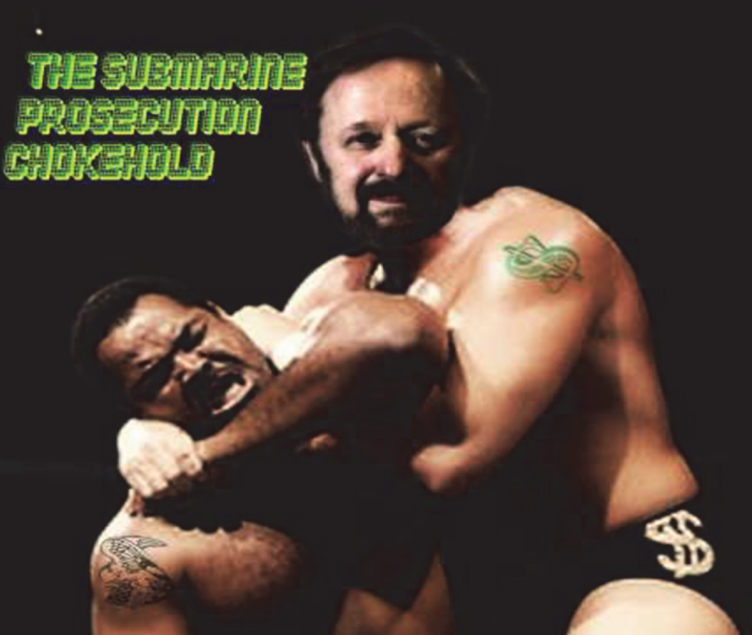 In 2018, Hyatt filed an Administrative Procedure Act (APA) suit seeking an order requiring “bona fide examination of his applications.” The lawsuit sought review under both Section 706(1) and 706(2).

The reviewing court shall—

(2) hold unlawful and set aside agency action, findings, and conclusions found to be (A) arbitrary, capricious, an abuse of discretion, or otherwise not in accordance with law; . . .

5 U.S.C. § 706.  The district court sided with the USPTO with a sua sponte summary judgment order — finding that the USPTO was already working diligently on the applications based upon its recent filing of “numerous office actions on plaintiff’s applications.” In the process, the district court (1) based its decision upon facts already developed in the administrative record and without following the usual summary judgment approach of drawing every reasonable inference in favor of Respondents; and (2) concluded that summary judgment was proper because Hyatt could not satisfy the extraordinary “mandamus standard” that the court concluded was required to prove a Section 706(1) or (2) case.  These two rulings form the basis of Hyatt’s newest petition for writ of certiorari.

Petitioner Gilbert Hyatt brought this action to challenge the Patent and Trademark Office’s secret rule, attested to by former agency officials and reflected in its official actions, to deny him further patents irrespective of the merit of his applications. After finding that Hyatt had plausibly alleged this rule’s  existence, the district court sua sponte entered summary judgment against him, notwithstanding clear disputes of material fact as to the agency’s actions. Expressly holding that the ordinary summary judgment standard of Federal Rule of Civil Procedure 56 does not apply in agency cases, the district court drew inferences, made credibility determinations, and decided fact disputes in favor of the agency and against Hyatt. It also held that, because there was no basis to “compel agency action unlawfully withheld or unreasonably delayed,” 5 U.S.C. § 706(1), the agency’s rule could not be “h[e]ld unlawful and set aside” as “arbitrary, capricious, an abuse of discretion, or otherwise not in accordance with law,” id. § 706(2). The Federal Circuit upheld the district court’s decision.

This Court should grant review to decide:

1. Whether the ordinary summary judgment standard of Rule 56 applies to review of agency action, as held by the First, Fifth, Ninth, and District of Columbia Circuits.

[Petition]. On the second question, in Norton, the Supreme Court held that the mandamus standard applies when seeking an order under 706(1) to compel some administrative action. Hyatt argues that an ordinary legal standard should apply to 706(2) when seeking a declaration that the agency’s past actions were arbitrary, capricious, an abuse of discretion, or otherwise not in accordance with the law.”

The setup here is somewhat parallel to Kappos v. Hyatt, 566 US 431 (2012).  In that decision, the Supreme Court held that Hyatt had a right to de novo consideration of evidence presented in a Section 145 civil action even for factual findings that had already been made as part of the prior administrative review.

102 thoughts on “Hyatt back to the Supreme Court: Special APA Procedures for the Patent Office?”