Prior to 1952, the Reissue Statute text only allowed for (1) narrowing claim scope and (2) fixing a “defective or insufficient” specification.  The 1952 Patent Act edited the law to allow for reissue for “error[s]” where the patentee claimed either “more or less than he had a right to claim.” Thus, for the first time the statute expressly permitted broadening reissues.  At the time, Congress also added a  statutory caveat that broadening reissue must be applied for within two years of the patent grant.  On paper, these changes might appear significant, but they were not overly controversial since the Patent Office and Courts had already allowed broadening reissues along  with the two-year laches caveat.

The 1952 Act remained silent on another broadening caveat — the rule against recapture that the courts had developed in the 1880s in response to perceived abusive practices.  Following the ’52 Act, courts concluded that the rule against recapture remained effective, and in recent years have expanded its scope. The most recent expansion is found with In re McDonald, 2021-1697, — F.4th — (Fed. Cir. Aug. 10, 2022) (applying recapture to amendments to overcome eligibility rejections).

The recapture rule has ordinarily been used to prohibit later recapture of scope that had been eliminated in an attempt to avoid a prior art rejection.  Carl Moy’s treatise explains the rule against recapture as follows:

[The rule against recapture] seeks to hold the patentee to the positions she impliedly took during prosecution of the original patent regarding the scope and cont[ent] of the prior art.  Specifically, where the patentee relinquished claims of a given scope in the original application, in response to a rejection based on the prior art, this is taken as  tantamount to her admission that the relinquished claim is in fact unpatentable over the art. The patent owner is later held to that admission during reissue.

5 Moy’s Walker on Patents § 16:107 (4th ed.); See also, Robert A. Matthews, §4 Annotated Patent Digest § 25:76 (“Surrender arises from a patentee’s canceling or amending a claim to avoid a prior art rejection and relying on the amended matter as avoiding the prior art.”).

Likewise, the MPEP finds impermissible recapture only when the original surrender relied on by the patent applicant to overcome the prior art. 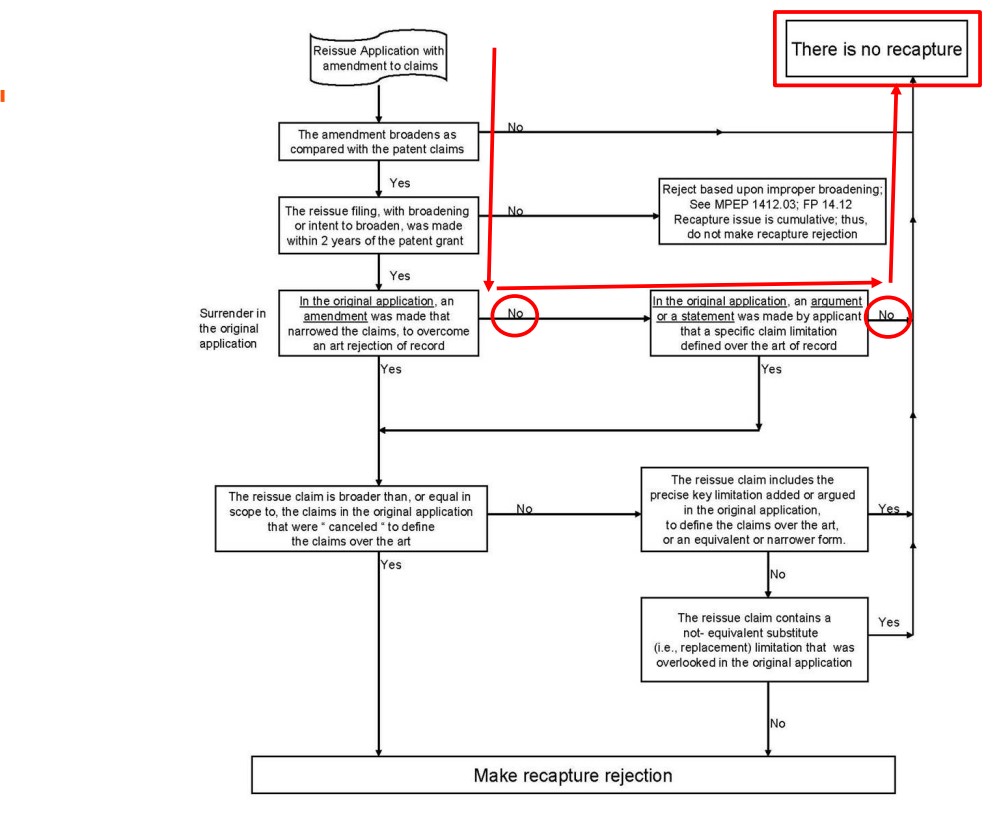 In McDonald, the court rejected these treatises and statements found in a large number of prior cases limiting unavailable recapture to the “prior art” context. Instead, the court applied the doctrine to prevent recapture of scope relinquished to overcome an eligibility rejection.

McDonald filed his patent application back in 2008 claiming a computer-implemented method of displaying primary and secondary search results.  In 2010, the examiner rejected the claims as lacking eligibility and the applicant amended the claims to add a requirement that the search algorithms are “executed by a processor.”  That amendment was enough for the PTO to overcome the eligibility issue.  A patent eventually issued (in a continuation application), but the patentee later figured out that its “a processor” amendment was going to tie the claims to operating both queries on a single processor.  The patentee then filed its reissue application within the two-year timeline, but sought to recapture the scope that had been amended-away.   The PTO refused to allow the amendment as impermissible recapture. On appeal, the Federal Circuit has affirmed — holding that the court’s repeated prior statements limiting the rule to overcoming prior art were merely context specific dicta.

The public’s reliance interest on a patent’s public record applies not only to subject matter surrendered in light of § 102 or § 103 rejections but also to subject matter surrendered in light of § 101 rejections. Mr. McDonald focuses on the “prior art” language of certain decisions—citing language describing the initial amendments as made in an effort “to overcome a prior art rejection”—in an attempt to limit the recapture rule to § 102 or § 103 rejections. Although we previously addressed cases centered on prior art rejections, this does not mean that the recapture rule is limited to that context.

Slip Op.  The court has previously held that the recapture prohibition did not apply to amendments made to overcome a Section 112 indefiniteness rejection.  Cubist Pharm., Inc. v. Hospira, Inc., 805 F.3d 1112, 1121 (Fed. Cir. 2015).  In Cubist though the court gave two reasons for rejecting the recapture rules: (1) amendment were not for the purpose of avoiding prior art; and (2) amendment was not actually  broadening. Cubist.  In McDonald, the Federal Circuit recharacterized Cubist as a case only about the broadening question. Similarly, the court rejected the MPEP as having any authority.

In Cubist, the court wrote that the “recapture rule applies only if the patentee surrendered subject matter in the original prosecution in order to overcome a prior art rejection.”  On appeal here, however, the court concluded that none of its prior cases “expressly prohibit the recapture rule from applying to amendments made for other purposes.”  Slip Op.

Although the court has not previously applied the recapture doctrine in the eligibility context, there are a number of cases that don’t state the “prior art” requirement.  For example:

Where an applicant for a patent to cover a new combination is compelled by the rejection of his application by the patent-office to narrow his claim by the introduction of a new element, he cannot after the issue of the patent broaden his claim by dropping the element which he was compelled to include in order to secure his patent.

Because there is no express statutory rule here other than the word “error,” the court appears to be willing to consider policy arguments in making its conclusions.  In its decision, the appellate panel reflects that McDonald offered no persuasive justification for distinguishing amendments to avoid Section 101 rejections from amendments made to avoid prior art.  The largest consideration here is likely that that this issue appears already well settled — with the Federal Circuit previously treating the rule as “rigid.”

The doctrine here has its roots in equity and concern that a reissue will operate as a “trojan horse” to by an “unscrupulous attorney” to cover competing products after the original patent issued and expectations had been settled.  Of course, in the area of eligibility expectations were not settled at the time. Further, we should recognize that during this time Congress also amended the reissue statute to eliminate the patentee’s “deceptive intent” as a hurdle to obtaining reissue.  (Do be clear, there is no suggestion that McDonald’s attorneys acted improperly in any way).

I believe that there is a good chance that McDonald will petition for en banc rehearing.