“Smart wallets” are growing in popularity.  I have one branded FIDELO with a  carbon-fiber case that claims to block scammers trying to read the chip on my credit card.  I think of these generally as “smart wallets” but I learned today that the company Storus has a registered trademark for that term. What should I call them now? 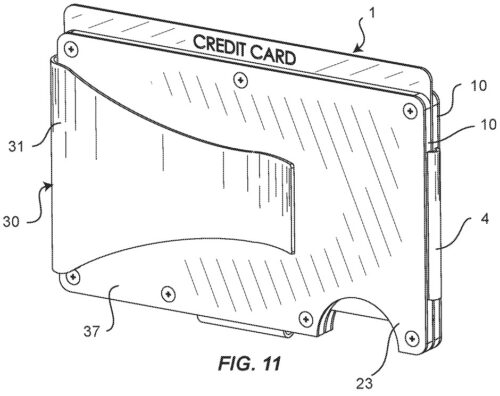 In 2020, Storus (AKA “Mosaic Brands”) sued Ridge Wallet for both patent infringement (US7334616) and product-design trade dress misappropriation.  Ridge counterclaimed with its own patent infringement contentions (US10791808, Fig 11 shown above).  The district court denied all the claims pre-trial.

On appeal, the Federal Circuit has sided with Ridge: Affirming that Mosaic has no case and vacating the anticipation summary judgment in Ridge’s favor.  On remand, the case should proceed to trial on the infringement counterclaims Ridge brought against Mosaic.

Is it Prior Art?: From a patent law standpoint, the most interesting part of the appellate decision focuses on anticipation and the basic patent-law game show question “Is it Prior Art?”

The purported prior art to the Ridge patent is a product manufactured and sold by Mosaic at a trade show.  The district court compared the asserted claims of Ridge’s US10791808 against the Smart Money Clip II (SMCII) and found each and every limitation embodied by the product. Mosaic presented testimony of its founder (Kaminski) that the SMCII product was on-sale more than 1-year before Ridge’s application filing date.  Mosaic also corroborated that testimony with invoices showing the SMCII was sold at a trade show in 2011.

On appeal, the Federal Circuit concluded that the evidence presented was sufficient for a jury to find anticipation.  But, the procedural problem here is that the district court superseded the jury and instead decided the case on summary judgment. In particular, the jury must decide whether the admittedly biased testimony is credible and whether the documents are authentic, taking into account the high standard of clear and convincing evidence.

While the District Court correctly concluded that the evidence was sufficient to satisfy the corroboration requirement, the District Court erred by proceeding to grant summary judgment of anticipation. Finding that Mosaic presented legally sufficient evidence to corroborate the inventor’s testimony does not necessarily mean that Mosaic’s evidence would also lead every reasonable factfinder – taking the evidence in the light most favorable to Ridge, as the non-moving party – to find by clear and convincing evidence that the SMCII does, in fact, predate the ’808 patent’s critical date. . . . Before the anticipation issue presented in this case can be resolved, a factfinder will have to evaluate the credibility and persuasiveness of the evidence of corroboration and make its own judgment as to whether Mosaic has proven, clearly and convincingly, that the SMCII is prior art to Ridge’s ’818 patent.

Slip Op.  To be clear, this opinion does not shut the door on anticipation summary judgment. But, for over 150 years the courts have hotly questioned and challenged  the credibility of self-serving prior art that first comes to light during the litigation.  The gold standard is always published documents (including patents and patent applications).

A patentee wanting to avoid summary judgment on witness credibility or document authenticity issues will need to provide some showing of a material dispute that creates reasonable doubt. But, because the patent challenger has such a strong burden of proof, the patentee’s showing does not require the presentation of contradictory evidence. Rather, it can be sufficient to simply present logical holes sufficient to create some reasonable doubt.

The District Court appears to have based its summary judgment decision, at least in part, on its belief that Ridge produced no affirmative evidence challenging Kaminski’s testimony. This was not consistent with our precedent, which holds that affirmative evidence is not always necessary in order to create a genuine dispute.

Slip Op.  Here, the patentee argued (1) the documents could have easily been backdated; (2) a lack of images of the SMCII from 2011; (3) a lack of any further documented sales; (4) a lack of meta-data associated with the provided documents showing their provenance; (5) Kaminski’s financial motive to misrepresent the information; and (6) the absence of any third-party corroborating evidence.  The patentee also presented some affirmative evidence — testimony that nobody had heard of Mosaic until 2019.  The appellate panel found these holes sufficient to create a dispute of material fact and thus avoid summary judgment:

Under these circumstances, Ridge is entitled to an opportunity to cross-examine Kaminski, in order to allow the factfinder to evaluate his credibility and the related issue of the authenticity of the corroborating documentary evidence. If the factfinder were to find that Kaminski is not credible, and that the documents on which Mosaic relies are not authentic, the record would then lack the requisite corroborating evidence and Mosaic would be unable to meet its clear and convincing burden.

Slip Op.  As an aside, I’ll note that that decision relates directly to the recent petition for writ of certiorari filed in Innovation Scis., LLC v. Amazon.com, Inc. (Supreme Court 2022)

I won’t go into this here, but the Federal Circuit opinion includes a discussion of product design trade dress. The court affirmed that the trade dress rights are invalid because the product design is functional.