BMC’s patents cover a method for processing a debit transaction without using a PIN. The payment industry is divided so that there is no single party that infringes an entire claim. However, when combined, the effort of a payee’s agent, an ATM network, and a financial institution

The usual rule is that direct infringement occurs only when a single actor performs “each and every element” of an asserted claim. Likewise, inducement requires proof of underlying single-actor direct infringement.  Under a doctrine akin to agency, all actions ‘controlled’ by the single actor are considered to be performed by the single actor.  Thus, courts have long held that you cannot avoid liability by simply “having someone else carry out one or more of the steps” on your behalf.

Here, BMC acts for an extension of the law in cases where parties are cooperating in a manner that infringes the patent – even though no single party controls the others. The CAFC, however, refused to extend the law — even while admitting that its decision paves a clear pathway for would-be infringers to avoid liability:

“This court acknowledges that the standard requiring control or direction for a finding of joint infringement may in some circumstances allow parties to enter into arms-length agreements to avoid infringement.”

The CAFC’s concern, of course is that allowing this type of joint infringement would greatly increase potential liability of many many companies. For instance, here, BMC would like to hold ATM networks liable even though their actions do not involve any novel part of BMC’s invention. Without any controlling party, BMC’s claim of infringement fails.

As part of its justification, the court cited Mark Lemley’s divided infringement article. In that article, Lemley argues that patent drafters can avoid most potential joint infringement problems by drafting claims that focus on one party at a time. 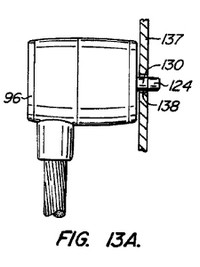 ACCO’s patent covers a method for locking a computer. Belkin’s lock can be used in an infringing manner (as well as in a non-infringing manner). At trial Belkin and ABA were found liable for willfully inducing infringement.

Based on ACCO’s failure to prove direct infringement, the CAFC reversed — finding no infringement.

Traditionally, direct patent infringement requires a single actor that causes infringement of each element of the asserted patent claim. An agency doctrine allows for multiple actors acting under control of a single entity. However, the common law of patents has long resisted calls for liability for any looser form of “joint infringement.”

In AdvanceME, the Texas court provided additional dicta expanding our notion of circumstances where two separate entities can combine to infringe a patent even when neither entity infringes all claim elements. Here, the court finds that multi-actor infringement requires (1) that all elements of the claim be performed and (2) that there be a “sufficient connection” between the accused actors. “A showing of ‘agency’ or ‘working in concert’ is not required.” The sufficient connection could instead “be shown through a contractual relationship.”

The infringement finding is, however, moot as the patent was also found invalid as anticipated and obvious.