In September 2010, Tyco Fire filed suit against Victaulic alleging infringement of two fire sprinkler system patents. U.S. Patent Nos. 7,793,736 and 7,819,201. Almost one-year into the lawsuit, Tyco Fire filed a pair of reissue application with the PTO – admitting that that both patents have defects that need correcting. The reissue applications request that the PTO narrow the subject matter being claimed with the apparent hope of avoiding an adverse invalidity decision in court.

After filing the reissue applications, the patentee requested that the district court stay the litigation pending the outcome of the reissue. In response, Victaulic cited my post from January 2011 identifying the average five-year pendency for reissued patents. In a brief filed under seal, Tyco's attorneys from Morgan Lewis called my post "unreliable" and "unsubstantiated" because it was found in a blog.

In deciding the issue, the judge correctly found that the reissue will certainly take some time even if my post regarding the average delay does not exactly predict the path for Tyco's applications. A potential important difference is that my data reflects the average for all reissue prosecutions but does not separate-out cases going through expedited reissue. See MPEP § 1442.

In the end, the judge refused to stay the litigation based upon the potential delay and the fact that the reissue does not appear to be likely to narrow the issues in the litigation. In addition, the court found that the reissue was motivated by claim construction questions posed by the defendant in the litigation. This timing issue (first seeing the claim construction arguments, then filing for reissue) raised "alarm bells" with the judge who identified the move as a potential "litigation gambit" intended to give the plaintiff a tactical advantage.

Note: I contacted the Morgan Lewis attorneys who submitted the brief for a comment on what was particularly unreliable or unsubstantiated regarding my post. They have not responded.

In 2008, the patent office reissued over 640 patents – breaking the prior record of 630 set in 1875. The historic numbers of reissued patents are shown in the first chart below grouped according to year of reissuance.

Although today's absolute numbers rival historic highs of the 19th century, today's relative number of reissued patents is close to the all-time low. The next chart shows the relative percentage of reissues as compared to utility patents granted (denominator based on a moving average of patents issued over of the prior ten years).

The final chart shows a time series of the average reissue pendency as measured from the reissue application filing date to the reissuance date. As is apparent, the pendency has been growing dramatically since 1997. 2009 looks to mark a second record – the first time that average prosecution pendency of reissues applications will be greater than five years. 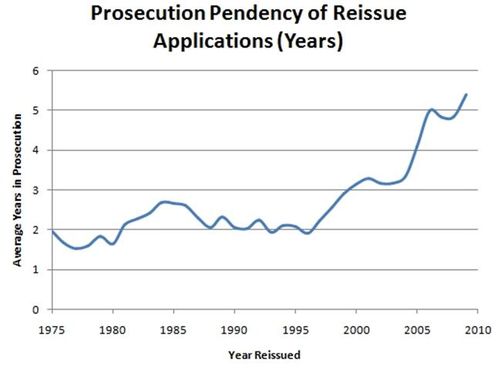 Background: The reissue process is designed to allow a patent holder to correct a defective patent and is nestled between certificates of correction (minor errors) and reexamination. 35 U.S.C. §251 spells out particular defects that may be corrected in the process: Defect in the specification; Defect in the drawing; Error in claiming too much; or Error in claiming too little. In Medrad, the Federal Circuit broadly read these final two defects to "encompass any error that causes a patentee to claim more or less than he had a right to claim." Medrad, Inc. v. Tyco Healthcare Group LP, 466 F.3d 1047 (Fed. Cir. 2006). A major limit on the reissue process is that "[n]o reissued patent shall be granted enlarging the scope of the claims of the original patent unless applied for within two years from the grant of the original patent." Section 251, final paragraph. The limit on improper broadening of reissues is strict and applies when claims are "broader in any respect." Predicate Logic, Inc. v. Distributive Software, Inc., 544 F.3d 1298 (Fed. Cir. 2008). 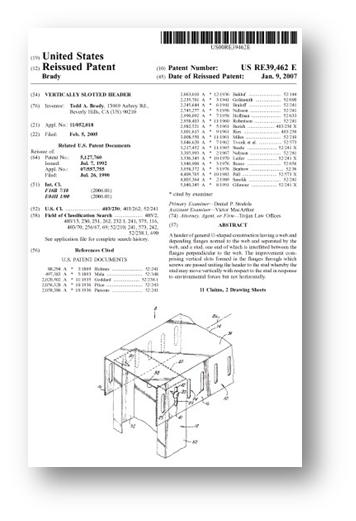 This case is simple. Brady filed for a reissue more than two years after the patent issued. The reissue broadened the claims. Those claims are therefore invalid.

Brady’s original patent issued July of 1992. After losing an infringement action in 2003, Brady filed for a reissue patent. The reissue patent issued as RE39,462 in 2007 and Brady again filed suit. The patentee’s press release at the time tells the story:

35 U.S.C. 251 spells out the guidelines for reissue patent applications. Generally, a reissue is available to correct an error made by the patentee. Although the statute specifically allows a reissue to correct an error in “claiming more or less than he had a right to claim in the patent,” the statute also places a strict two-year time limit on enlarging the scope of any claims.

Any enlargement in scope of any claim element will generally run afoul of the limitation. In particular, the CAFC has repeatedly held that a claim will be considered to be enlarged under Section 251 if “it contains within its scope any conceivable apparatus or process which would not have infringed the original patent. A reissue claim that is broader in any respect is considered to be broader than the original claims even though it may be narrower in other respects.”

Here, based on the construction of the original patent by the CAFC, it was clear that the new claim had been broadened – rendering it invalid.