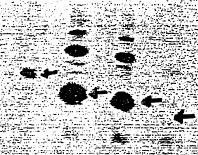 In an appeal from a decision of the PTO Board, the Federal Circuit affirmed the rejection of claims directed to isolated DNA molecules encoding TNF binding protein II (TBP-II) under the written description requirement of 35 U.S.C. § 112.

Appellants had purified TBP-II from urine and determined (a) the amino acid sequence of an N-terminal portion of the protein, (b) the protein’s molecular weight, and (c) that the protein inhibited TNF activity. Appellants then pursued, in separate divisional applications, claims directed to proteins having the partial sequence, molecular weight, and inhibitory activity described and claims directed to isolated DNA molecules encoding such proteins. The DNA claims were rejected under § 112 as lacking an adequate written description in the specification. Appellants appealed to the Board, which affirmed.

Appellants asserted that because the PTO had effectively conceded that claims to the TBP-II protein were adequately described in the specification, the claims to isolated DNA molecules encoding the TBP-II protein were therefore adequately described in the specification. Specifically, Appellants argued that because the complete amino acid sequence of a protein is an inherent property of an isolated, fully characterized protein, and the determination of a protein’s complete amino acid sequence puts one in possession of all DNA sequences encoding that protein (as a result of the unequivocal correspondence between amino acids and DNA codons in the genetic code), Appellants’ full characterization of TBP-II (i.e., determination of its N-terminal amino acid sequence, molecular weight, and inhibitory activity) demonstrated possession of all DNA sequences encoding TBP-II. The PTO countered that because Appellants’ specification included neither the complete amino acid sequence of TBP-II nor any actual DNA sequence, and disclosed the sequence of only ten of the 185-192 amino acids that make up TBP-II, Appellants had not demonstrated possession of all DNA sequences encoding TBP-II.

NOTE: This is the first post by patent attorney Donald Zuhn, PhD. Don is a true expert in cutting edge biotech patent law and practices both prosecution and litigation at McDonnell Boehnen Hulbert & Berghoff LLP in Chicago. [Brief Biography].