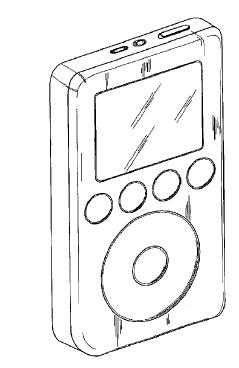 Apple has received a design patent on its 3G iPod. The application was filed just days before the public release of the new iPods, and issued as a new patent on October 26. (U.S. Patent No. D497,618). Apple Insider and Steve Nipper have more information.

LINK: The patent laws provide for the granting of design patents to any person who has invented any new and nonobvious ornamental design for an article of manufacture. The design patent protects only the appearance of an article, but not its structural or functional features. The proceedings relating to granting of design patents are the same as those relating to other patents with a few differences. See current fee schedule for the filing fee for a design application. A design patent has a term of 14 years from grant, and no fees are necessary to maintain a design patent in force. If on examination it is determined that an applicant is entitled to a design patent under the law, a notice of allowance will be sent to the applicant or applicant’s attorney, or agent, calling for the payment of an issue fee. The drawing of the design patent conforms to the same rules as other drawings, but no reference characters are allowed and the drawing should clearly depict the appearance, since the drawing defines the scope of patent protection. The specification of a design application is short and ordinarily follows a set form. Only one claim is permitted, following a set form.