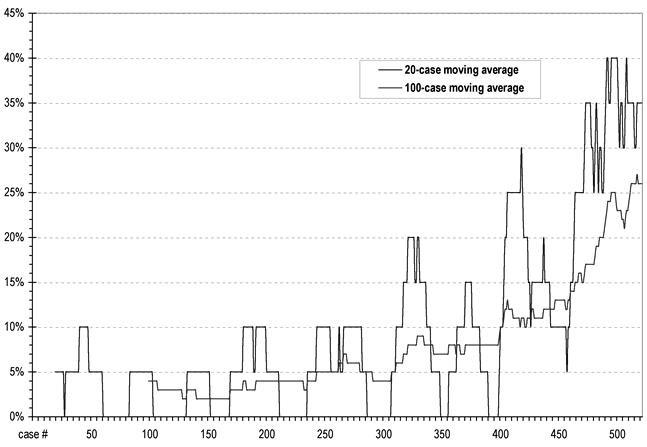 Link: America was founded as a dissenting opinion in the 18th Century colonial world.  Not wishing to be unpatriotic, the Court of Appeals for the Federal Circuit has been on a rampage — issuing dissents with abandon.  According to Professor Polk Wagner’s research, the percentage of dissenting or concurring opinions in CAFC cases has risen from under 5% in the late 1990’s to over 25% today.  (chart from www.fedcir.org).

Comments: The amount of dissent on the court clearly indicates that the composition of the panel for your case will have a major impact on your outcome.  As Stephen Nipper and Hal Wegner have noted, if the composition of the panel was known well in advance of appeal, the resulting certainty would lead to more settlements.  Despite any internal conflict within the Federal Circuit, it would be laughable to argue that the law is less settled or less certain than it was prior to the formation of the court.