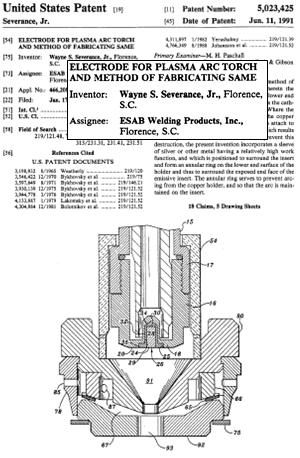 At the district court, Esab Group won a multi-million dollar judgment against Centricut for infringement of Esab’s patent relating to plasma welding products.  Centricut appealed the judgment and the measurement of damages.  Esab cross-appealed, asking for a modification of the judgment on damages.

On appeal, Centricut argued that ESAB had not satisfied its burden of proof on infringement because it failed to present expert testimony comparing the claims as construed with the accused device.  The Appeals Court agreed that expert testimony was essential in this case:

[E]ach of Esab’s three theories [of infringement] suffers from the same deficiency: none is supported by expert testimony. The first theory, adopted by the district court, rests on the district court’s own interpretation of the evidence. The latter two theories rest on the testimony of witnesses who were admittedly not experts on [the specific technology].

… This case stands as an apt example of what may befall a patent law plaintiff who presents complex subject matter without inputs from experts qualified on the relevant points in issue when the accused infringer has negated infringement with its own expert.

The Court went on to say that experts are not necessary for cases where the technology is “easily understandable.” And, that there is no “per se rule that expert testimony is required to prove infringement when the art is complex.”  However, “where the accused infringer offers expert testimony negating infringement, the patentee cannot satisfy its burden of proof by relying only on testimony from those who are admittedly not expert in the field.”