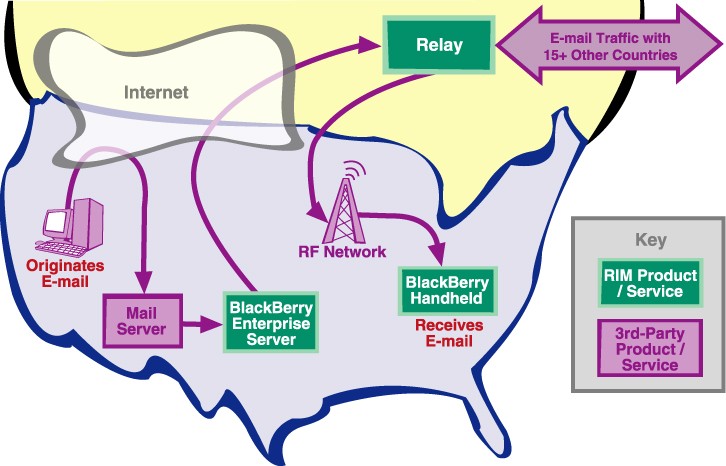 BlackBerry maker Research-In-Motion (RIM) has requested a rehearing en banc at the Federal Circuit in an attempt to escape from the $53 million damage award and the expected injunction against its BlackBerry system for patent infringement.  In a strong power play, the Government of Canada has filed an amicus brief, supporting the rehearing.  As have the Canadian Chamber of Commerce and the Information Technology Association of Canada.  These Canadian Briefs essentially ask the court for comity — arguing that the holding in RIM upsets the business and legal climate in Canada. (Other amicus briefs are expected to be filed within the next few days).

Frankly, I was surprised at the Federal Circuit’s decision last month that found that RIM could be liable for direct infringement even though its some of the necessary elements of the asserted claims occurred outside the U.S. (in Canada).  The diagram above (from RIM’s brief) shows RIM’s e-mail relay in operation in Canada.  The relay is a distinguishing feature of NTP’s patents.

In my view, based on standing precedent of Deepsouth and Pellegrini, the Federal Circuit got this case wrong, and the standard of “control and beneficial use” should be tossed.

The court has traditionally had a strong stance against extraterritorial application of the patent laws.  In Deepsouth Packing Co. v. Laitram Corp., 406 U.S. 518 (1972), the Supreme Court of the United States (SCOTUS) strictly interpreted the patent act to find that unauthorized manufacturers of patented products could avoid liability for infringement under the then-existing law by manufacturing the unassembled components of those products in the United States and then shipping the components out of the United States for assembly. Congress enacted 35 U.S.C. § 271(f) in order to close that loophole.  However, § 271(f) does not apply to the facts of RIM v. NTP.   In Pellegrini, the court found that Pellegrini’s case against Analog did not fall within the scope of newly enacted § 271(f), and thus, that the U.S. patent laws did not apply to extraterritorial manufacture and sale of a patented electric motor.

In each of these cases (Deepsouth & Pellegrini), the Court denied the plaintiff’s requests for extraterritorial application of the U.S. patent laws because the statute did not specifically call for such an application.  Because the statute does not specifically call for infringement under the RIM v. NTP scenario there should be no infringement here either.

As an aside: I do believe that there should be some legislative action to amend the patent laws in order to catch individuals who move portions of their systems (such as their router) to another country in order to avoid liability for patent infringement.  However, the Federal Circuit, like the Supreme Court in Deepsouth, is not in a position to generate such legislation.  Is anyone interested in working with me to draft such legislation?

UPDATE: James Hill, a blog reader from the UK wrote in noting the similarity between RIM and the UK case of Menasche v. William Hill. [summary] In Menasche, the Court of Appeals ruled that the invention (a system for online betting) was put into effect in the UK even though the server was located abroad. “By using their terminals in the UK, William Hill’s customers were in a real sense also using the overseas host server in the UK.”

I think that there are some very strong similarities between the BlackBerry case and Menasche. The one major difference that RIM’s attorney made in my discussion with him is that the operation of the ROUTER is a critical element of NTP’s patent claims — that portion of the claim was particularly pointed out by NTP during prosecution of the patent as a factor that made the invention unique from other prior art.  Thus, the claim is not keyed on the two end users, but rather about the entire chain of operation.
I agree that the specific facts are different from Pellegrini.  However, the principle that I derive from Pellegrini and Deepsouth is that there is a specific statute in U.S. Patent law that calls for extraterritorial application of the patent laws, and regardless of the policy arguments, the U.S. patent laws do not apply to foreign actions except where specifically called for in the statute.
UPDATE II: Mr. Petit over at Scrivener’s Error makes the point that the the principle that “a right imply a remedy” might save the original opinion.
UPDATE III: Mathew Ingram, an excellent columnist at the Globe and Mail has written an article [subscription req’d] on the subject.  He questions whether the Canadian Government made the right move by filing a brief in this case.
UPDATE IV: In an interesting twist, Computer Leasco Inc., a small computer company based in Michigan, filed a complaint against NTP alleging that NTP officials engaged in the “outright theft” of Computer Leasco’s interests in intellectual property that NTP now holds. (WSJ article)
Links:
Hide comments