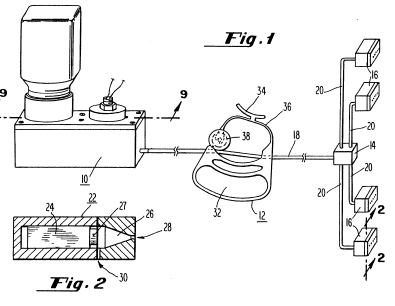 Trident, a wholly-owned subsidiary of Illinois Tool Works, is a manufacturer of printheads and owns U.S. Patent No. 5,343,226 covering the technology.  The ‘226 patent discloses an ink jet device and a supply system with a hand actuated peristaltic pump.  Trident also manufactures ink for use with the patented printheads.  Although the ink is not protected by any of Trident’s patents, their standard license agreements grant the right to “manufacture, use and sell… ink jet printing devices…” to other printer manufacturers only “when used in combination with ink and ink supply systems supplied by Trident.”

Independent Ink also manufactures ink useable in Trident’s patented printheads.  Independent filed suit in the Central District of California against Trident and Illinois Tool Works alleging, among other things, an illegal tying arrangement in violation of section 1 of the Sherman Act.  The district court, however, dismissed the case on summary judgment.

On appeal, the Federal Circuit reverses and remands the district court’s grant of summary judgment in favor of Trident on the tying claim.

According to the Appellate Court, Trident’s licenses are “explicit tying agreement[s]” because the sale of a patented product is conditioned on the sale of an unpatented one.  Although the district court required affirmative proof of market power from the plaintiff, the Federal Circuit reiterated that the Supreme Court has clearly established a presumption of market power unique to patent and copyright tying cases, it holds that this presumption is rebuttable.

“Once the plaintiff establishes a patent tying agreement, it is the defendant’s burden to rebut the presumption of market power and consequent illegality that arises from patent tying.”

Rebuttal evidence requires expert testimony or “credible economic evidence of the cross-elasticity of demand, the area of effective competition, or other evidence of lack of market power.”

Furthermore, the Court admonishes the district court for not following clearly established Supreme Court precedent and for dismissing the High Court’s holdings as “vintage.”  Commenting that it may be time to abandon the doctrine, a significant portion of the opinion emphasizes that it is up to the Supreme Court or Congress to expressly overrule its own precedent — this prerogative does not lie with the district courts.

Note: Deana Larkin is an attorney at the law firm McDonnell Boehnen Hulbert & Berghoff LLP in Chicago with a background in biotechnology.  Ms. Larkin received a PhD in biochemistry from the University of Houston where her research concerned RNA-Protein interactions. [Brief Bio]