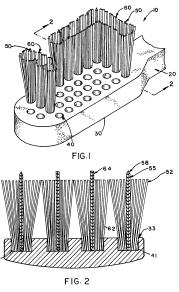 In the mid 1990’s, Alfred Salazar of Bixby Oklahoma applied for and received a patent on a toothbrush that contained both elastic stimulator rods (for stimulating the gums) and elastic polishing rods (for cleaning the teeth).

Acting pro se, Salazar sued P&G for infringement, but lost on summary judgment after the district court determined that P&G’s products do not infringe because they included nylon rather than elastic.  The district court had distinguished nylon from elastic based on the examiner’s Reasons of Allowance that discussed a prior art bristle as “made of nylon, which is not considered elastic.”

On appeal, the CAFC reversed, finding that a unilateral statement of an examiner in stating reasons for allowance does not create a clear and unambiguous disavowal of claim scope nor give rise to prosecution history estoppel.*

In dissent, Judge Bryson agreed that “an applicant is not bound by every statement made by an examiner during the course of the prosecution.” However, Judge Bryson argued that in this case, “the examiner made clear his understanding of the meaning of the term ‘elastic’ as used in the patent . . . [I]n light of the central importance of the examiner’s understanding of the meaning of the term to his decision to allow the claims, the absence of any indication that the patentee intended the claim term to be broader supports the district court’s conclusion that the ‘elastic’ stimulator rods should not be construed to include rods made of nylon.

*Note: The CFR section regarding comments on reasons for allowance has been amended since the patent in this case issued. This case was decided based on the old regulations.