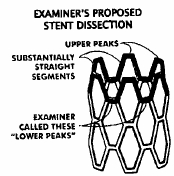 On summary judgment, the lower court held that Medtronic’s vascular stent patents were not infringed.  On appeal, the CAFC made an interesting point about claim construction — holding that a disclaimer in the file history of a patent applied equally to construction of similar terms in all the family member cases.  The patentee had consciously chosen to use different claim language in later continuation applications —  perhaps to avoid the prior disclaimer.  The CAFC paid this no matter.

Medtronic correctly states that its claims do not all use the [disputed] term “end” to describe the connection. . . Instead, certain claims use “turn” or “curved member.” . . .  However, because the specification . . . uses “peaks” and “turns” synonymously, and “turn” and “curved member” are used in the []patent claims synonymously with “end,” we find that those claims embody the same “peak” or “end” limitation as the [parent], i.e., the disclaimer from the [parent] patent applies against the [child] patent. Our conclusion is further buttressed by the established rule of claim interpretation that dictates that like terms should be construed consistently across related claims.

According to the Court, Medtronic admitted that the varying claim language should be identically interpreted when it made the statement that the child claims were allowable “for at least the same reasons as the parent application.”