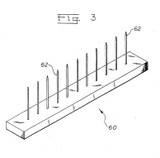 The Federal Circuit has upheld the NDNY’s ruling that a settlement leading to dismissal of  a complaint with prejudice precludes Pactiv from re-challenging Dow’s patents.

In 1995, Dow sued Pactiv for infringement of two patents related to manufacturing polyethylene foam. This suit settled in 1998 and Dow’s complaint was consequently dismissed with prejudice.  In 2002, Pactiv stopped paying royalties as required by the agreement.  In late 2003, Pactiv followed up by filing a declaratory judgment action asserting the patents were invalid, unenforceable, and their own non-infringement.   Dow moved for dismissal under Rule 12(b)(6), claiming res judicata.  The district court agreed with Dow that Pactiv’s action was barred by the prior final judgment since the settlement did not explicitly reserve Pactiv’s right to future litigation.

The CAFC found that claim preclusion is not specific to patent cases and thus applied the local circuit law to the case. Both the 2nd Circuit and the CAFC agree a dismissal with prejudice is a judgment on the merits for purposes of claim preclusion.  Where there is a settlement, the CAFC found an express reservation to litigate is required for a settling party to relitigate a claim otherwise barred by res judicata.

Pactiv also claimed they were not given a full and fair opportunity to litigate.  Pactiv argued that Dow’s expert’s data “had been fabricated” and that Pactiv would not have settled if it had known the data were false.  The CAFC agreed that failure to receive a full and fair opportunity to litigate would be a valid defense to issue preclusion.  However, the CAFC held that “res judicata was precluded only where there was a denial of due process.”  Since the 1998 dismissal with prejudice met due process, the judgment was upheld.

What could Pactiv have done once they learned the circumstances of the expert’s report?  The CAFC suggested they seek relief under Rule 60(b). Rule 60(b) provides one year to reopen final judgments due to mistake, new evidence, fraud, etc.

Practice tip for those representing patentees: Condition settlements on receiving a stipulated dismissal of suit with prejudice.