Quality patents depend upon our ability to find and examine prior art regardless of its form. Most prior art cited by the USPTO arrives in the form of patent-related references — most notably, issued U.S. patents, published patent applications, and foreign patent documents. We know, for instance, from Columbia Professor Bhaven Sampat that about 90% of cited non-patent prior-art references are provided by the applicant, and that only 10% are examiner references. Link.

In some technologies where patenting has a long and extensive tradition, the lack of non-patent prior art is not a serious problem.  In other areas such as software and biotechnology, non-patent references harbor most of the important prior art.

Questions: Why do we see this effect? How should a practitioner react?

Saturation Point: At the other end of the spectrum, it appears that citing more than twenty references does nothing to the likelihood of rejection. As the figure below shows, as the number of cited references increases, the likelihood of receiving a rejection steadily increases until about twenty references are considered.  After that, there is no statistically significant change in final rejections based on a change in the number of cited references. 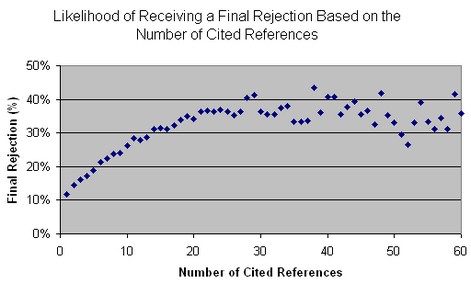 18 thoughts on “Evidence Based Prosecution: Non-Patent Prior Art Leads to Rejections”