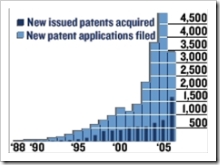 Microsoft refuses to state which particular patents are infringed in an attempt to avoid retaliation from FOSS advocates. However, the statements certainly put Linux and its users under a dark cloud — potentially sufficient for a declaratory judgment action under MedImmune v. Genentech (2006).

Microsoft’s patent filing have ramped-up significantly over the past five-years, and the company will likely top the list of new-patent-owners in the coming years.