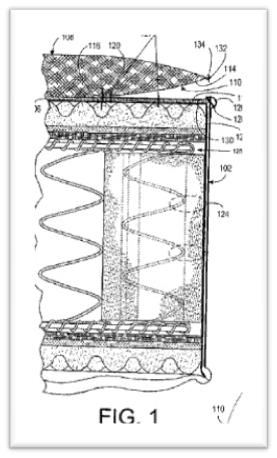 The patentee, Atlanta Attachment, won a summary judgment on issues of infringement and validity. Missouri based defendant Leggett & Platt appealed — arguing that the patented sewing machine had been “on sale” for more than one year before Atlanta Attachment filed its patent application.

The on sale bar of 102(b) invalidates an issued patent that was on sale prior to the one-year critical date. In Pfaff, the Supreme Court defined “on sale” as requiring an embodiment of the claimed invention being subject to a commercial offer for sale and being ready for patenting at the time of the sale. The on sale bar can be negated in certain cases where experimentation was still occurring.

Facts: Atlanta Attachment was working with Sealy to develop a special ruffle producing sewing machine. Over the course of a few years, several prototypes were sent to Sealy for experimentation. Each one was returned to the plaintiff for improvements. The third prototype included all of the claimed elements. Atlanta Attachment invoiced Sealy and was paid for the prototype. Instead of delivering the prototype, however, Sealy merely tested the prototype at the patentee’s facility and was later refunded its purchase price. At that time. Sealy made further suggestions regarding changes. In addition, Atlanta Attachment had offered to sell 50 production units prior to the critical date.

Thus the claim is invalid under the on sale bar of 35 U.S.C. §102(b). Additionally, the CAFC asked the court to reexamine whether the patentee’s failure to submit information about the prototypes would be sufficient to lead to a finding of unenforceability due to inequitable conduct.

Concurrence: Judges Prost and Dyk joined the majority opinion, but also penned a separate concurring opinion begging for en banc review of the “confusing” jurisprudence on the experimental use exception to 102(b). “Without considering these issues in a comprehensive manner in future cases, we will never escape from the confused status of our current caselaw.” They specifically believe that this and other CAFC decisions are wrongly decided because of the absolute disregard of any experimental use after an invention is reduced to practice.

22 thoughts on “Warning: Do Not Rely on the Experimental Use Exception to 102(b)”