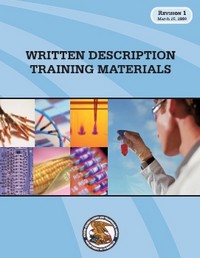 The PTO has released a new set of Written Description Training Materials that include a series of Seventeen examples of proper written description rejections. According to the accompanying notes, these materials are intended to “supersede and replace the 1999 training materials.”

Because most of the action in written description continues to focus on biochemistry, the bulk of the document is directed toward those issues. However, all practitioners should review the following examples: