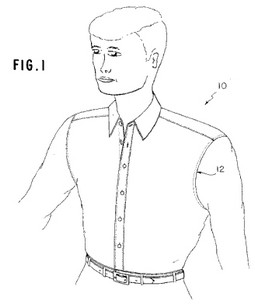 Summary: (1) An applicant need not disclose its own prior work or inspiration for invention if merely cumulative of other references cited; (2) Failing to identify the brand of adhesive tape used in the invention was a best mode violation — resulting in claim invalidation; (3) There is no presumptive order of the steps in a process claim – unless the claim language “requires an ordering of steps” either implicitly or explicitly.

One of TAL’s employees – John Wong – was inspired by TAL’s use of heat-fusible adhesive tape in manufacture raincoats. Over a long process of trial and error, Wong figured out how to use a particular variety of adhesive tape to create a dress shirt that does not pucker after washing.

After receiving a US utility patent, TAL became embroiled an patent litigation with another Hong-Kong based manufacturer – Esquel Apparel. In that litigation, the district court found TAL’s patent unenforceable due to inequitable conduct during prosecution and invalid for failing to submit fulfill the “best mode” requirement of 35 U.S.C. 112 (inter alia).  Based on the inequitable conduct, the court also awarded attorney fees to Esquel.

Inequitable Conduct: “In this case, the district court found TAL liable for inequitable conduct because inventor John Wong had not disclosed the raincoat seam that inspired his invention to the PTO.” On appeal, the CAFC first dispelled any notion that a patent applicant is required to disclose the inspiration for the invention. Although not stated by the court, 35 U.S.C. 103(a) arguably indicates that the inspiration is not relevant to the patentability inquiry: “Patentability shall not be negatived by the manner in which the invention was made.”

Here, the CAFC noted that TAL’s raincoat may well have been “merely cumulative” to a German patent application that was submitted during prosecution. “If the undisclosed raincoat seam was merely cumulative to [the German application], then no inequitable conduct lies in its nondisclosure.”

Best Mode: At the time of filing, Wong had settled upon a particular type of adhesive tape – known as Vilene SL33 – as the best way to form the seams.  The patent application did not, however, disclose Vilene SL33.  A patent may be invalidated for failing to submit a “best mode” if (1) the inventor possessed a best mode at the time of filing; and (2) the written description fails to disclose the best mode in a way to allow one reasonably skilled in the art to practice that mode.

Possession of the Best Mode: The evidence clearly showed that Wong “experimented with many adhesives but settled on a preference for one.” Thus, the court agreed that the first prong was met — the inventor did possess a best mode at the time of filing – i.e., Vilene SL33.

On the second prong the CAFC disregarded the applicant’s argument that the PTO “prefers the use of generic names of products” and that there is no evidence that the Vilene brand products are actually better quality than other brands.  Instead, the court honed-in on the result of the first prong – that Vilene SL33 was the best mode known to the inventor – and agreed that the best mode had not been disclosed. “TAL has not explained how the written description teaches one having reasonable skill in the art the way to practice the best mode as found in the analysis of the first prong – the use of Vilene SL33.”

Process Order: “Generally, there is no presumption of order, and so a claim with many steps can be infringed by an accused process performing the claimed steps in any order. However, we will find that the claim requires an ordering of steps when the claim language, as a matter of logic or grammar, requires that the steps be performed in the order written, or the specification directly or implicitly requires such a narrow construction.”

Conclusion: The asserted claims were found invalid and not infringed. The remand appears only necessary to determine inequitable conduct and consequently potential attorney fees.