In the 1980s patent practitioners were being pressed by clients to keep costs down. At the same time they were seemingly presumed by courts to understand right away any prior-art reference that made its way into their offices, and how that reference might relate to patent applications they were writing or prosecuting. They were rather upset with the drift of the law on inequitable conduct. It seemed the courts were allowing something short of intentional deception to make out that defense and to ruin a client’s otherwise solid case for validity and infringement. Language like “gross negligence” had crept into some of the appellate decisions. With enough time and funding by the challenger, many non-cited things in a patent practitioner’s possession could be made years later to look important to patent prosecution, and explanations for non-citation always seemed at that late date a little lame. All the challenger needed to do is find one of those things and persuade the judge to label the non-citation as gross negligence. 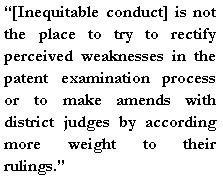 The Federal Circuit recognized the problem and in 1988 handed down Kingsdown Medical Consultants Ltd. v. Hollister Inc.,[1] wherein the court reiterated that intent to deceive the PTO had to be proved by clear and convincing evidence. In an in banc section of the opinion labeled “Resolution of Conflicting Precedent,” the court held that gross negligence could not alone suffice to make out inequitable conduct.[2] The profession breathed a little easier. They were perhaps out of the frying pan.

However, shortly after Kingsdown a number of other cases rightly pointed out that deceivers seldom come forth and say they acted with intent to deceive. “Such intent usually can only be found as a matter of inference from circumstantial evidence.”[3] Through the 1990s the Federal Circuit appreciated the continuing need to make an actual finding that a particular person acted to mislead the PTO in a particular way. It told us “a finding of intent to deceive the PTO is necessary to sustain a charge of inequitable conduct.”[4] In a withholding-type accusation, reaching that conclusion of course requires a subsidiary finding that the person appreciated the significance of the withheld item. Without that appreciation, he can hardly be trying to deceive the examiner about the item.

In the last three years Federal Circuit panels have slipped back into “should have known” language to arrive at the conclusion of intent to deceive or mislead the PTO.[5] That is the language of simple negligence. Even more troublesome, they seem to have reached the “should have” finding by reference to the importance (materiality) of the item to the prosecution proceeding, the logic of which is somewhat elusive. In 2008 a number of cases have now explained how all this is consistent with Kingsdown. Negligence alone might not be enough, but when material information is found in the hands of persons connected to patent prosecution, they need to provide a “credible explanation” or suffer a finding of bad intent.[6]

The trouble with this approach is that it allows even simple negligence (“should have known”) to shift the burden of persuasion on intent to the patent owner. This shift will happen in just about every case, because the finding of materiality in a combative courtroom setting will nearly always generate the “should have known” prong, shifting the entire burden of credibly showing benign intent onto the patentee. In the dynamic of actual patent litigation years after the events in question, that burden is indeed a fearsome one. In life, consider how often we ask ourselves when bad situations arise: “Why did I do that? Why didn’t I see the connection?” Credible-sounding explanations are not that easy to come by, even when we know we are innocent. Explanations on the ground of human fallibility feel hollow, and this is especially so in the majestic setting of a court proceeding. The patent bar and their clients have gone out of the frying pan and into the fire.

Some rays of hope have appeared for rectifying the situation. Judge Newman dissented in Nilssen, the small-entity status case.[7] And Judge Rader has seen the problem in what I regard as its proper light. In May of this year two panel judges sitting with him upheld a district court’s finding of inequitable conduct in a withholding-of-information case. The two were unwilling to reverse the lower court’s conclusion that the explanation given for non-citation was not credible.[8] Dissenting, Judge Rader said: “[M]y reading of our case law restricts a finding of inequitable conduct to only the most extreme cases of fraud and deception. . . Although designed to facilitate USPTO examination, inequitable conduct has taken on a new life as a litigation tactic. The allegation of inequitable conduct opens new avenues of discovery; impugns the integrity of patentee, its counsel, and the patent itself; excludes the prosecuting attorney from trial participation (other than as a witness); and even offers the trial court a way to dispose of a case without the rigors of claim construction and other complex patent doctrines.”[9] Amen to that. This is not the place to try to rectify perceived weaknesses in the patent examination process or to make amends with district judges by according more weight to their rulings. Worthy and important goals those may well be, but shifting burdens on inequitable conduct is not the way.

Inequitable conduct burdens have in the past rightly been placed on the challenger. Establishing this defense has required a finding not about what a person should have known, but that the person involved actually did appreciate of the significance of the information to the prosecution process. Now the burden on the intent prong has de facto shifted. Hopefully it will return to where it was. I have always thought the relative importance of the item as seen years later has little to do with finding an intent to mislead. Most of the time it is just as easy in life to fail to connect important dots as unimportant ones.

56 thoughts on “Inequitable Conduct: Out of the Frying Pan?”