In November 2008, a jury returned a verdict finding that Sony had induced infringement of Agere’s patent by marketing and selling its PlayStation Portable (PSP) game. It is interesting to look at the simplicity of the jury form:

Post-verdict motions are still pending in the Sony case, but an appeal is expected.

In Spine Solutions v. Medtronic (D.Del. 2008), the jury found that the asserted claims were non-obvious and that the patentee was entitled to lost profit damages. 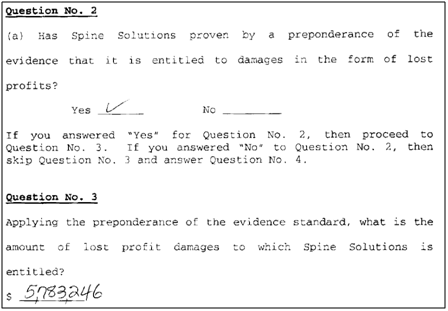 Some of the damages were also awarded based on a “reasonable royalty” of 18%.