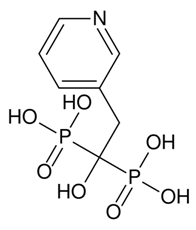 P&G’s osteoporosis drug Actonel reportedly has $1.5 billion in annual sales. Hoping to manufacture a generic version, Teva challenged P&G’s patent – arguing obviousness in light of a prior P&G patent (the ‘406 patent) and obviousness-type double patenting. The district court rejected those challenges, and on appeal the Federal Circuit affirmed the patent’s validity. The patent is set to expire in 2013.

New Compound is Nonobvious: The claimed active compound – risedronate – is a bisphosphonate. In arguing obviousness, Teva pointed to P&G’s ‘406 patent which listed “central problems” in using bisphosphonates to treat osteoporosis. Although the prior art patent does not list risedronate, it does suggest the use of thirty-six similar molecules in the same class including one a positional isomer of the claimed risedronate. The positional isomer (2-pyr EHDP) includes the same atoms as risedronate, but those atoms are arranged in a somewhat different order.

In addition to these structural differences, P&G pointed to “contemporaneous writings from Herbert Fleisch, the preeminent authority on bisphosphonates during the relevant time period.” Fleisch wrote that “every … bisphosphonate, exhibits its own physical-chemical, biological and therapeutic characteristics, so that each bisphosphonate has to be considered on its own. To infer from one compound the effects in another is dangerous and can be misleading.”

On appeal, the Federal Circuit agreed that these differences were sufficient to push development of the new compound beyond the obvious – additionally noting that Teva had not shown that a PHOSITA would have had a “‘reasonable expectation of success’ in synthesizing and testing risedronate.” Here, the court quoted its 1988 O’Farrell decision: “Patents are not barred just because it was obvious ‘to explore a new technology or general approach that seemed to be a promising field of experimentation, where the prior art gave only general guidance as to the particular form of the claimed invention or how to achieve it.'”

This holding further supports the conventional wisdom that the KSR case will have much less impact in the area of pharmaceutical research.

Secondary Factors: In arguing secondary considerations of nonobviousness, TEVA argued that the element of long-felt but unmet need could not be proven because another drug (aledronate) was available prior to risedronate. The Federal Circuit rejected that argument – holding that the need may still have existed because the P&G patent application was filed before the other drug was on the market. “Under Monarch, we look to the filing date of the challenged invention to assess the presence of a long-felt and unmet need.”

Swearing Behind Not Allowed: P&G’s researcher had evidence that it had invented risedronate prior to the filing of the ‘406 patent. In particular, the inventor submitted a lab notebook with detailing the structure of risedronate and the procedure for its synthesis. However, the Federal Circuit rejected the evidence because the entry “was unwitnessed and was not corroborated by any other evidence.”