I created the following graph after reading the Federal Circuit’s 3-2 claim construction reversal in Martek. Can you guess what the graph represents? 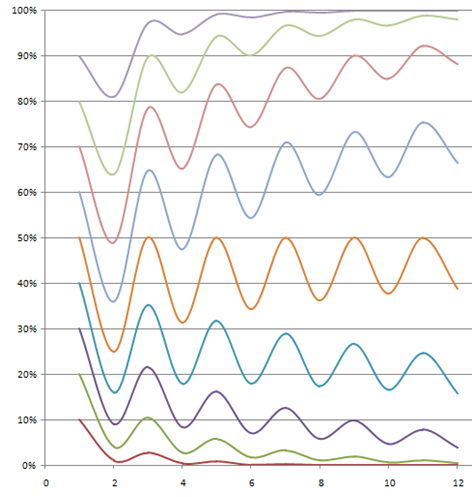 The graph also illustrates a second point – that in theory multiple judges tend to make marginal cases more predictable. Thus, an argument that will convince a judge 70% of the time would be predicted to carry the day in almost 90% of 12–member en banc panels.

Of course, this discussion relies on several false premises.  Most notably, the analysis assumes that each panel member decision is independent of the decision made by other panel members. That is is clearly not true.  Rather, the judges and clerks communicate and influence one another.  In addition to independence, the analysis presented here presumes that each judge has the same likelihood of deciding the case in a particular direction.

19 thoughts on “Mystery Graph of the Day”