Perry Saidman is a frequent contributory to Patently-O — especially when the topic turns to design patent law. In a recent case, his firm used copyright law to protect its client's wire-flower design. The flowers were incorporated into candle holders and other small useful objects.

Although cheap ($35), early copyright registration is important for collecting infringement damages. Registration is also helpful in establishing priority and ownership. In this case, the designer registered early and was awarded $750k for willful infringement. 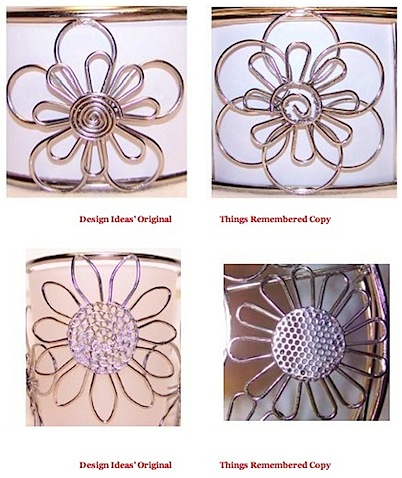 The original complaint also included charges of trademark and utility patent infringement. The broadest claimof the utility patent (No. 6,398,058) includes a limitation that "loops formed to simulate a flower" are used to connect the base to the top:

a base including a lower support wire bent to establish the predominant shape of said base;

a top including an upper support wire bent to establish the predominant shape of said top;