In December 2009, the USPTO issued 16,000+ utility patents.  I used a software program to tally those patents that include claims with means-plus-function (MPF) claim language by looking for the terms “means for” or “means of” in the claims.

Looking claim-by-claim, I found that only 3% of the patents in my sample included means-plus-function limitations in every independent claim. 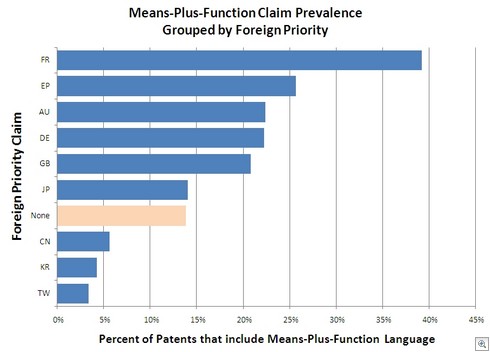 The chart below shows means-plus function claim prevalence of the top-20 patent owners (based on the number of patents owned in the sample). These companies are all primarily focused on electronics and are all headquartered in either the US or East Asia. 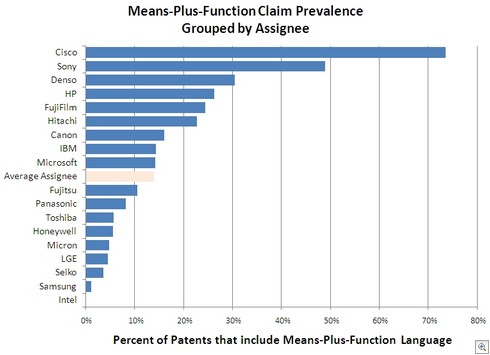 The final chart shows the change in patent prosecution practice over time. Clearly, the use of means-plus-function claims has dropped over time. This is true even in the face of rising claim counts. The chart below is based on a sample of 22,000 randomly selected patents that issued 1976–2009.  I grouped the patents according to their decade of issuance and calculated the percentage that included at least one means-plus-function limitation.  *The chart also includes the December-2009 data mentioned above. 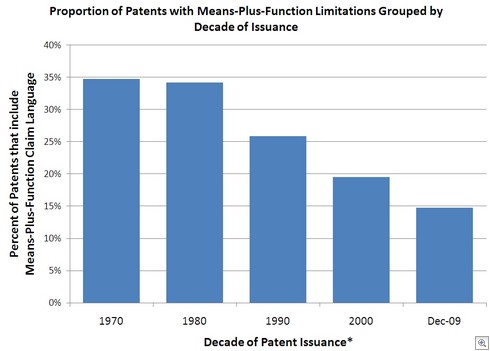 Notes: My search is likely both over and under inclusive.  Although a claimed element that uses the terms “means for” is usually interpreted as an MPF claim, it is not always so interpreted. Likewise claim terms written in functional language without any structure in the claims can be interpreted as means plus function even if the absence of the “means for” language. Also, “step for” language is typically when a method step is functionally claimed.