The Eighth Circuit Court of Appeals is holding court in the Missouri Law School this week. One of the appeals being heard is a copyright case involving the 1939 Wizard of Oz movie (as well as Gone with the Wind and Tom & Jerry). The case is captioned, Warner Bros. Entertainment, et al. v. X One X Productions, et al., App. No. 10-1743. TBS (now owned by TimeWarner) claims title to the copyright to the Wizard of Oz movie. The defendant apparently obtained a set of publicity posters and other material from the movie that are in the public domain and that were distributed prior to the movie being copyrighted. The public domain materials included images of Judy Garland playing Dorothy Gale, Jack Haley as the Tin Woodsman, etc. Using those public domain materials as a base, the defendant began manufacturing and selling t-shirts and trinkets showing the likeness of the well-known characters. To be clear, at least for the t-shirts, the defendant only used images cropped from the public domain materials. As the accused products below show, the defendant also included well known phrases from the movie such as “there’s no place like home.”

Warner (WB) sued the defendants alleging copyright infringement as well as liability under the Lanham Act. On summary judgment, the Missouri-based district court agreed that the defendant had not copied any images from the films, but still held that the defendant was liable for infringing the film copyrights. In particular, the lower court held that WB held copyright to the Wizard of Oz characters as portrayed in the movie:

i.e., Judy Garland as Dorothy Gale, Ray Bolger as Scarecrow, Jack Haley as Tin Man…. Each character has widely identifiable traits and is especially distinctive. Each has been extensively developed through the films. Be it Dorothy’s inherent wisdom coupled with her Midwestern farm girl innocence, … or the apparent inconsistencies of Scarecrow, (without a brain vs. wisdom and leader), Tin Man (without a heart vs. compassion and tenderness) and Cowardly Lion, (without courage vs. bravery and chivalrousness), they are especially distinctive.

Ironically (and without comment from the district court), the particular identifiable traits of the characters identified here (apart from the portraying actors) were all derived directly from L. Frank Baum’s 1900 Wonderful Wizard of Oz novel that is now out of copyright.

they pluck from these pages images of Plaintiffs’ copyrighted characters such that Defendants’ images are no longer innocently copied publicity ads, but are indeed the characters themselves, to be embossed onto any number of trinkets, clothing and other collectibles. . . Notwithstanding Defendants have copied only the publicity materials, such actions violate the component parts of Plaintiffs’ copyrights in the films.

Based on the finding of copyright infringement, the district court issued a permanent injunction that prohibits the defendants from

using for commercial gain images from the film The Wizard of Oz as well as images of Judy Garland as Dorothy Gale, Ray Bolger as Scarecrow, Jack Haley as Tin Man, and Burt Lahr as Cowardly Lion [except] that Defendants are [may use] reproductions of public domain movie publicity materials, in their entirety and without alteration or modification.

On appeal, the defendants have argued that they should be able to use particular images of the Wizard of Oz characters so long as they are taken from the public domain materials. 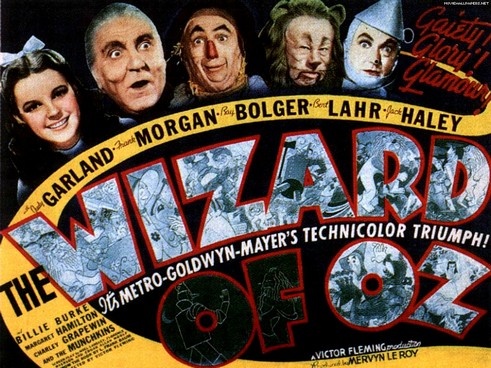 51 thoughts on “Copyright Interlude: What is the Public Domain?”