The USPTO has announced a new Chief Administrative Patent Judge to lead the Board of Patent Appeals and Interferences (BPAI). James Donald Smith will be leaving his role as Chief IP Counsel for Baxter International to take on the difficult task of shoring up the important section of the Office. Smith is expected to begin serving as Chief Judge on May 8, 2011 and is replacing Michael Fleming who stepped down in 2010 and Jay Moore who has been the Acting Chief Judge for the past several months.

The BPAI is struggling with a caseload that has grown dramatically over the past several years and a backlog of over 20,000 pending appeals. In addition a large and growing number of hotly contested inter partes reexaminations are reaching the Board and creating a heavy workload. These proceedings increasingly involve high profile patents involved in parallel infringement litigation. In many cases, courts stay litigation pending outcome of the reexamination and are looking to the USPTO for accurate and timely conclusions. The Board’s profile and its workload would likely both increase under the patent reform measures now pending in Congress. 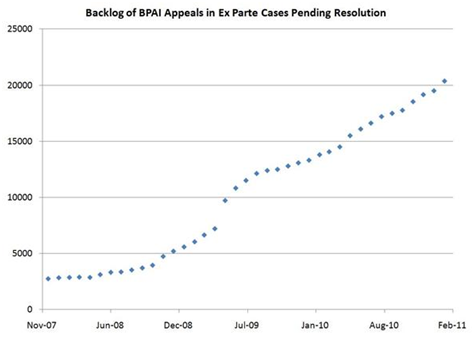 Mr. Smith has been a registered patent attorney since 1988. He graduated from Duke University (J.D.) and the University of Maryland at College Park (B.S.E.E.).

The upper management of the USPTO is now solidly in the hands of patent law professionals with extensive experience in corporate patent law and management practice. This includes Director David Kappos (20+ years at IBM); Deputy Director Theresa Stanek Rea (25 years law firm practice); BPAI Chief Judge James D. Smith (20+ years in law firm and corporate practice); and Administrator for Policy and External Affairs Albert Tramposch (years in law firm practice followed by governmental work). Two exceptions to this “rule” are the Patent Commissioner Robert Stoll and Deputy Commissioner Peggy Focarino. Both Stoll and Focarino started their patent careers as examiners and have been at the USPTO collectively for more than 60 years. Although very much a “political” position, the role of Commissioner is most often filled by individuals who have dedicated the bulk of their careers to the USPTO.