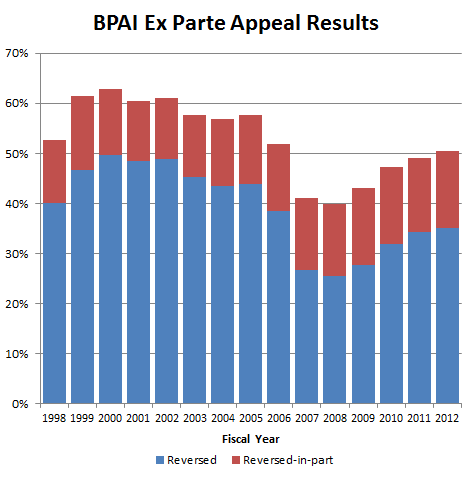 Because of the availability of settlement, percentage win-rate is often given little policy consideration.  Ex parte appeals are no different.  Before reaching a BPAI decision, examiners can “settle” by withdrawing their pending rejection and then either allowing the patent to issue or else prepare a new and different rejection of the pending application.  Patent applicants can also settle cases by abandoning the case or else by filing an amendment and a request for continued examination (RCE).

The chart above shows percentage win-rate for BPAI appeals in ex parte cases. In an earlier study, I showed that the vast majority of these decisions are on obviousness grounds. Note – I only considered appeals decided on the merits and excluded those remanded or dismissed on other grounds.