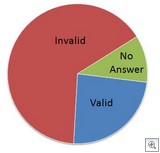 Last week I asked readers their thoughts on the validity of claim one of U.S. Patent No. 8,185,967.  The patent issued recently to Digimarc and is titled a Method and apparatus for content management.  Of the 917 responses, I removed 4 for inconsistent responses* and 11 for failing to complete the one-question survey.   Of the remaining, 24% concluded that the claim was valid; 65% concluded that the claim was invalid, and 11% had no answer. The most common reason for invalidity: Obviousness followed by lacking patentable subject matter under section 101.**

* Four of the responses indicated that the claim was both valid and invalid.

** The survey allowed for the selection of multiple answers. About 9% of responses selected two or more answers. The most common multiple selection was that the patent was both invalid under 101 and invalid as obvious.

52 thoughts on “Survey Response: Is the patent invalid?”