The English (and Wales) court of appeals has issued a new decision in the ongoing global intellectual property battle between smartphone competitors Apple and Samsung. This case focused on Apple's Community Design No. 000181607-0001 and affirms the trial court ruling by the High Court Judge Colin Birss that the three accused Samsung Galaxy models do not infringe. The court has also affirmed Judge Birss's equitable order forcing Apple to advertise its loss (in order to partially correct damage done to Samsung's reputation).

A registered European Community Design is roughly equivalent to a US Design Patent. However, the Europeans have done away with the examination process and replaced it with registration without considering whether the design is actually novel. Thus, while the European law requires that a registered community design be novel (a lower standard than nonobvious), that issue is not raised in the initial registration process. The US continues to examine design patents for novelty and nonobviousness. However, the USPTO's examination of design patent novelty can best be described as a farce. In a 2010 study, I found that the vast majority of design patent applications do not receive even a single rejection during the examination process and only 1.2% are the subject of an obviousness or novelty rejection. In that essay I identified our system as that of de facto registration. Because of the in-expense and ease of registration, Community Designs have been quite popular.

Up to now, the process of obtaining Community Designs has been largely separate from that of US design patent rights. This will change, however, if the US finalizes legislation implementing the Hague Agreement. Earlier this year the US Senate passed the "Patent Law Treaties Implementation Act of 2012" (S. 3486) that would implement the Hague Agreement (as well as the procedural Patent Law Treaty PLT). If there is no major objection, the House of Representatives is likely to pass its version of the Act in the lame duck session of Congress following the November presidential election.

The opinion in the present case is written by Lord Justice Robin Jacob who has retired from the bench but is regularly called back to hear intellectual property cases. As you will find with virtually all of Lord Justice Jacob's decisions, the case is well written, layered, and informative. Lord Justice David Kitchin (another IP focused jurist) joined the panel. In addition to the related design patent litigation in the U.S., this particular community design is being litigated in Germany, the Netherlands, and Spain.

Infringement of a community design is defined in Article 10 of the Community Design Regulation EC 6/2002 and asks whether the accused design "does not produce on the informed user a different overall impression" after taking into consideration "the degree of freedom of the designer in developing his design." Although worded somewhat differently, this standard is on track with U.S. design patent infringement law that considers whether an "ordinary observer, familiar with the prior art designs, would be deceived into believing that the accused product is the same as the patented design." In both situations, the "most important things [to be considered for infringement] are the registered design, the accused object and the prior art and the most important thing about each of these is what they look like."

Jacob, LJ, begins his opinion with a statement about copying—notably that copying is irrelevant to the infringement analysis:

3. Because this case (and parallel cases in other countries) has generated much publicity, it will avoid confusion to say what this case is about and not about. It is not about whether Samsung copied Apple's iPad. Infringement of a registered design does not involve any question of whether there was copying: the issue is simply whether the accused design is too close to the registered design according to the tests laid down in the law. Whether or not Apple could have sued in England and Wales for copying is utterly irrelevant to this case. If they could, they did not. Likewise there is no issue about infringement of any patent for an invention.

4. So this case is all about, and only about, Apple's registered design and the Samsung products. The registered design is not the same as the design of the iPad. It is quite a lot different. For instance the iPad is a lot thinner, and has noticeably different curves on its sides. There may be other differences – even though I own one, I have not made a detailed comparison. Whether the iPad would fall within the scope of protection of the registered design is completely irrelevant. We are not deciding that one way or the other. This case must be decided as if the iPad never existed.

The appellate opinion fully supported Judge Birss's initial determination that substantial differences led to a rejection of the infringement contention. In particular, when compared with the registered design, Samsung devices are thinner and have substantial surface ornamentation. Other features – such as a flat rectangular screen – the court found to so "banal" as to not contribute to the infringement analysis. The court found the rounded corners also unremarkable and of obvious function for a handheld device. Normally, an accused infringer cannot avoid infringement with use of its distinctive trademark on the product. In this case, however, the court found that Samsung's trademark name on its device helped to distinguish the device from the Apple registered design because of the label was additional ornamentation that contradicted Apple's approach of substantially lacking surface ornamentation.

Taking all this as a whole, Judge Birss could not see any infringement. In the appeal, Jacob, LJ, agreed noting that "Overall I cannot begin to see any material error by the Judge."

54.    I would add that even if I were forming my own view of the matter, I would have come to the same conclusion and for the same reasons. If the registered design has a scope as wide as Apple contends it would foreclose much of the market for tablet computers. Alterations in thickness, curvature of the sides, embellishment and so on would not escape its grasp. Legitimate competition by different designs would be stifled.

European-wide declaration of non-infringement affirmed. Now, in all likelihood Apple will take its appeal to the EU Court of Justice (CJEU) who is the final arbiter of EU community design law.

56. Firstly I cannot understand on what basis the [German] Court thought it had jurisdiction to grant interim relief. I do not think it did [have jurisdiction] for several reasons.

At minimum, a national court associated where interim relief is sought loses jurisdiction as soon as the court seized of the substance of the case (according to community design law) issues its decision.

In addition to wrongly hearing the case, Jacob, LJ also argues that the German Court wrongly decided the case.

61. … I regret to say that I find the Oberlandesgericht's reasoning on the merits sparse in the extreme….

62. What the Oberlandesgericht did not do was to consider Judge Birss's decision in detail. It gave only meagre reasons for saying "The Court cannot concur with the interpretation of the High Court". I regret that. …

63. … If courts around Europe simply say they do not agree with each other and give inconsistent decisions, Europe will be the poorer.

There are probably three ways to see this conflict: (1) as a lack of effort on the German court's part (unlikely); (2) as a lack of respect for UK courts (more likely); or (3) as an indication that German's support stronger design rights than do the UK courts (most likely).

The decision also suggests that the German court should force Apple to compensate Samsung for the trouble it has caused with its approach to obtaining a preliminary injunction:

Whether or not Samsung has any claim in the German courts for all the losses it has suffered as a result of preliminary measures which proved to be unjustified is obviously not a matter for us. I hope it does. If the position were the other way round, that the unjustified preliminary measures had been granted by the English and Welsh courts, the "injured" party would have a remedy under the cross-undertaking in damages which the English court normally requires as a condition of granting a preliminary measure which is not ultimately vindicated in a main trial. 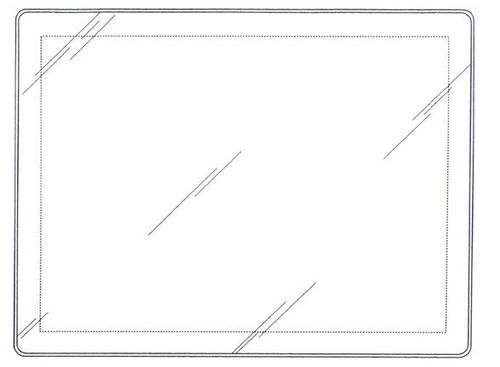 Ghost Lines in Design Patents: Although minor in the context of this appeal, Lord Justice Jacob has an interesting comment on the dotted "ghost" lines that have become common in US design patent drafting. According to the MPEP, those lines are allowed as "Environmental structure" so long as "clearly designated as environment in the specification." MPEP § 1503. The Apple registration included a dotted line frame showing the boundary of the operational portion of its screen. Samsung unsuccessfully argued that dotted line should not be given any patentable weight based upon what Jacob, LJ calls "a complicated point based on the guidelines for examination."

21. There is one other point about how the informed user would assess the registered design, a point decided by the Judge adversely to Samsung. Views 0001.1 and 0001.3 show the front of the tablet. There is a rectangular dotted line shown. Apple submitted, and the Judge accepted, that the dotted line indicated a frame below a glass face – of the kind now familiar on all sorts of touch-screen devices. Samsung ran a complicated point based on the guidelines for examination. It submitted these would lead the informed user to conclude that the dotted lines were there to indicate that a feature was not protected: thus the fact that the Samsung device does have a "frame" is to be disregarded.

22. This is faintly absurd: a bit like the notice-board reading "Ignore this notice." For if there were no dotted rectangular line, the front face of the design as registered would be entirely plain. So it would then be for the informed user to form a judgment as to whether a tablet with a frame created a different overall impression. In short, on Samsung's contention if there were no dotted lines the position would the same as if they were there.

This development if applied broadly could actually become a major source of contention and difficulty in implementing the global design rights system suggested by the Hague Agreement.

As an aside on the ghost line point, I briefly reviewed the prosecution history file of the US design patent that serves as the priority filing for the community design in this case. See U.S. Design Patent D504,889. In my review, I did not find any applicant remarks indicating that the dotted line in the frame is merely an environmental structure or indicating that the dotted line should not be considered as an element of the design patent. Judge Koh considered this issue during the US litigation of the '889 patent and agreed in dicta that "A reasonable interpretation of the dotted lines in the D′889 patent … is that the dotted lines are intended to show the inset screen below the glass-like surface. At this point, without the aid of prosecution history, evidence regarding drafting principles, or argument from the parties, the Court considers the dotted lines to most likely indicate an inset screen and are likely part of the claimed design." Apple, Inc. v. Samsung Electronics Co., Ltd., 2011 WL 7036077 (N.D.Cal. December 02, 2011). For its decision, the court cited Bernardo Footwear, L.L.C. v. Fortune Dynamics, Inc., 2007 WL 4561476 (S.D.Tex. Dec.24, 2007). In that case the court held that broken lines in a design patent were part of the claimed design because the drafter had failed to explain the significance (or significance) of the broken lines.