This case involves a suit brought by prolific inventor Aris Mardirossian's company Technology Patents LLC against more than 100 domestic and foreign defendants that TPL accused of infringing US Reissue Patent No. RE39870.  While the primary subjects addressed by the court are those of claim construction and infringement , there are several additional noteworthy issues discussed at the end of the post.

The '870 patent relates to a global paging system.  According to the patent, the prior art was deficient because "it did not fulfill the need for a cheap and efficient global paging system that allows users who expect to receive messages or pages abroad to 'remotely input country designations in which they are to be paged.'"  Slip Op. at 13, quoting '870 patent.  The '870 patent sought to cure the deficiencies of the prior art: "The ’870 Patent solved this problem by claiming a system which allows for paging of the receiving user (“RU”) in countries where the RU “may be located,” as per a list input by the RU." Id., quoting district court.  Claim 4, the primary claim addressed on appeal, recites  (claim terms at issue in the appeal are in bold):

4. A system for paging a receiving user in a country-selective paging system, comprising:

interconnecting servers so as to permit digital communication of signals between the plurality of servers via at least the packet-switched digital data network;

Claim Construction: Much of the claim construction dispute revolved around the meaning of "receiving user."  The district court construed this term to mean a "person or party," while TPL contended that it means "the combination of the person and the handset."

Applying what has often been described as a holistic approach to claim construction, the Federal Circuit affirmed the district court's construction.  In other words, the court applied a flexible, relatively unstructured approach to construing the claim terms as opposed to a rigid rules-based approach.  In this particular case, that meant looking closely at the intrinsic evidence.  "The text of the patent makes clear that the term “receiving user” does not refer to a person-pager combination."  Slip Op. at 19. The court applied a similar approach to the two remaining claim terms.

Holistic Infringement Analysis: TPL also argued that, even if the CAFC affirmed the district court's claim constructions, it nevertheless erred in its grant of summary judgment of noninfringement.  On this point, too, the Federal Circuit affirmed.  While much of the CAFC's conclusion was based on the "receiving user" limitation, the court's overall approach bore many similarities to its holistic claim construction: the court made frequent reference back to the specification even as it assessed the question of infringement, rather than rigidly applying its claim construction.

For example, in responding to TPL's argument that because the accused systems permitted users to select the carrier when traveling abroad, some of which contained country information (see below figure), the court pointed out that "The specification and the claims make clear that the invention is concerned with the country in which the receiving user is located, not with the receiving user’s carrier." Slip Op. at 29.  This carried through to the assessment of infringement under the doctrine of equivalents, as the court concluded that "the distinction betwen selecting a carrier and selecting a country is not insignificant in the context of the patent….That is a fundamental difference between the accused systems and the claimed invention that goes to the heart of the claimed invention."  Slip Op. at 34. 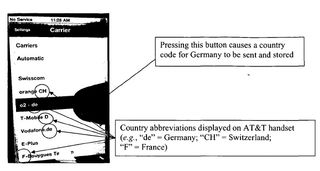