Courts are rarely asked to judge beauty. Such a subjective practice would normally be anathema to the ideal of objective legal standards. However, one area of federal law has a long tradition of explicitly requiring courts to make aesthetic decisions: the law of design. Examination of design patent law offers unique insight into how aesthetic considerations have been, and are currently, employed by courts to make legal decisions.

In the United States, patent law offers protection for inventions originating within diverse fields of endeavor. In addition to utility and plant patents, design patents represent a third category of patent rights, which are available to inventors of "any new, original and ornamental design for an article of manufacture . . . ." (35 U.S.C. §171). Since they were first made available in 1842, more than 630,000 design patents have issued in the United States. The very first design patent was issued to George Bruce in 1842 to protect a new "Type" font (U.S. Patent No. D1). Later design patents issued to protect such iconic designs as the Statue of Liberty (D11,023, granted to Auguste Bartholdi) and the Coca-Cola bottle (D48,160, granted to H. Samuelson). Over the past several years, design patents have enjoyed a resurgence in popularity, with applications to the United States Patent and Trademark Office increasing markedly (Steven L. Oberholtzer, The Basic Principles Of Intellectual Property Law 6, 2d ed. 2009).

Not unsurprisingly, many courts have interpreted U.S. design patent law to require an element of artistry. Although no such requirement was explicitly present in the original design patent statute, the Patent Act of August 29, 1842 (ch. 263, 5 Stat. 543), judicial interpretations of the ornamentality requirement often appeared to necessitate that designs possess features that were aesthetically pleasing to the human eye. In Blisscraft of Hollywood v. United Plastics Co., 294 F.2d 694, 696 (2d Cir. 1961), the court mandated that "[a patented design must] be the product of aesthetic skill and artistic conception." As recently as 1989, in dicta from Bonito Boats, Inc. v. Thunder Craft Boats, Inc., 489 U.S. 141, 148, the U.S. Supreme Court echoed the view that, to be patentable, designs must be visually attractive, explaining that, "[t]o qualify for protection, a design must present an aesthetically pleasing appearance that is not dictated by function alone, and must satisfy the other criteria of patentability." Thus, the legal requirement that a design patent be "ornamental" was long interpreted to necessitate artistry or an aesthetically pleasing effect.

Roughly coincident with the creation of the Court of Appeals for the Federal Circuit ("CAFC") in 1982, design patent law doctrine appeared to change direction, as aesthetic considerations were deemphasized in deciding the validity of designs claimed in patents. This shift was decisively heralded a decade later, in Seiko Epson v. Nu-Kote International, 190 F.3d 1360, 1368 (1999), when the CAFC stated "the 'ornamental' requirement of the design statute means that the design must not be governed solely by function. . . ." So well accepted has the non-artistic interpretation of the law become that law firms now generally counsel their clients that aesthetic considerations hold little relevance for design patents. To illustrate how well accepted this principle is, consider the following statement about design patent law on page 7 of The Basic Principles of Intellectual Property Law (Second Edition, 2009), a primer of intellectual property law freely distributed to potential clients by the venerable law firm, Brinks Hofer Gilson & Lione: "There is no requirement that the design be artistic or pleasing to the eye." The trend away from aesthetic interpretations of the ornamentality requirement has brought U.S. design patent law closer to that in other jurisdictions, such as the European Union and Canada, where aesthetic considerations appear to play little role in determining the validity of design patents or registrations.

An experimental approach was used to test the hypothesis that aesthetic considerations in design patent law have, indeed, diminished over the last thirty years. All design patents from 1982 (that is, the creation of the CAFC) to 2010 in which a court made a final determination of validity or infringement were identified, and each design patent therein scored for validity and infringement. Then, in a controlled experiment, human subjects were asked to score the attractiveness of all the patented designs at issue in these cases.

The experimental results indicate that, at the beginning of the time period considered, patents claiming the least attractive designs were most likely to be found invalid, those claiming designs of intermediate attractiveness fared better in terms of validity, but were found to have been infringed relatively less often, and patents claiming the most attractive designs were most likely to be found both valid and infringed. In other words, aesthetically pleasing designs claimed in patents tended to fare better in court than did less attractive designs. However, the results also indicate that, while the attractiveness of patented designs found valid, whether infringed or not, has changed little since 1982, the average attractiveness of patented designs found invalid has risen markedly over time. In fact, in contradistinction to the situation early in the time period surveyed, the attractiveness of a design claimed in a patent has now become a poor predictor of judicial outcome. Design beauty appears to have ceased to be a useful predictor of judicial outcome in design patent litigation.

A few of the experimental results of this study are illustrated below. Complete results for all litigated design patents, by type of court (that is, all federal courts, federal district courts, and the CAFC), and litigation outcome (that is, validity, invalidity, infringement, and non-infringement) can be found in the full version the article, available as a free download at http://papers.ssrn.com/sol3/papers.cfm?abstract_id=2156943.

FIGURE 1 is a scatterplot graph that depicts the mean attractiveness of all design patents according to the year in which a court ruled on their validity or infringement. FIGURE 1 also shows the results of a linear regression of these data. The regression analysis shows very little change (y = 0.0132x – 21.511, R² = 0.0146) in the attractiveness of patented designs from 1982 to 2010. 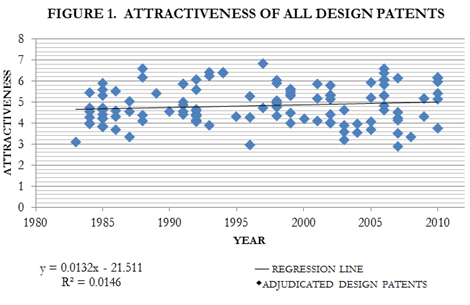 FIGURE 2 is a scatterplot graph that depicts the mean attractiveness of all design patents found invalid by a court by year of court ruling. FIGURE 2 also shows the results of a linear regression of these data. The regression analysis shows a more substantial rise (y = 0.0495x – 93.82, R² = 0.2183) in the attractiveness of patented designs found invalid from 1982 to 2010. 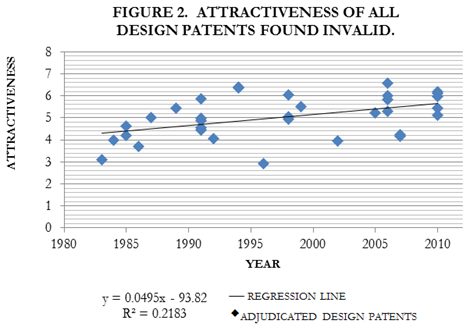 a. Overall stability in attractiveness

For most of the categories of outcome and types of courts considered there was little change in the measured attractiveness of patented designs from 1982 to 2010. These results apply to patented designs found to be (1) valid but not infringed and (2) both valid and infringed, and pertain to results from both federal district courts and the CAFC. These data show little evidence that the attractiveness of patented designs held valid (whether infringed or not) changed from 1982 to 2010 across most categories of outcome and types of court.

b. Rise in attractiveness of PATENTED designs HELD INVALID

There may be policy advantages to dropping the requirement for aesthetics, chief among which may be improved consistency in making decisions about design patent validity. Judgments about attractiveness are inherently subjective, depending as they do on the personal aesthetic sensibilities of the judges who determine design patent validity. Relying, instead, on a more objective test of ornamentality, such as lack of functionality, is likely to lead to improved consistency in validity determinations, not only in court and at the USPTO, but also among design patent owners considering infringement litigation and defendants attempting to avoid such actions.

A second salutary implication for policy involves the harmonization of U.S. design patent law with standards of intellectual property law prevailing internationally. The weakening of the aesthetics requirement in its design patent law has moved the United States towards the design protection laws that predominate in most other jurisdictions, such as the European Union and Canada. Access to a similar test of design patent (or design registration) validity across jurisdictions may afford design patent owners advantages of efficiency, since determinations of validity in one jurisdiction would be more likely to hold true in others.

Coinciding approximately with the inception of the CAFC, design patent doctrine appears to have begun to shift away from an aesthetic interpretation of the statutory ornamentality requirement. In particular, the measured attractiveness of patented designs finally found invalid by courts has increased substantially over the last three decades. Both legal doctrine and experimental results agree that beauty appears to have faded as a requirement for design patent validity.

Andrew Torrance is a Professor at the University of Kansas School of Law, a Visiting Scholar at MIT Sloan School of Management, and a Research Fellow at the Gruter Institute.