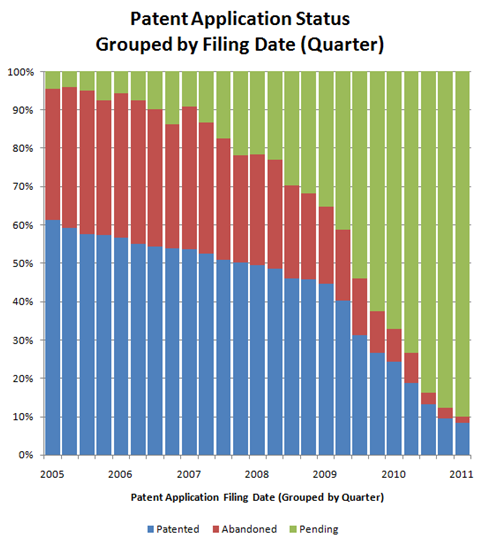 The chart itself is limited only to published applications because that is the only way to peek into the status of abandoned or still pending applications. Because of that limitation, ignored applications filed after March 2011 because many of those have not yet published. The patented data (in blue) was generated from a dataset that I created of all patents that have issued since January 2005. The abandoned and pending portion of the chart was created from a randomly-sampled subset of about 10,000 applications that were published but not yet patented during the appropriate time period. For applications claiming PCT priority, I used the US national stage filing date.

Although seemingly small, the 5% of applications that are still-pending after eight years in prosecution is concerning for a number of reasons. Most of these applications have been delayed by one or more appeals to the BPAI (now PTAB). Those patentees could have likely obtained earlier protection (with narrower scope), but the delay is often not a problem for the patentee because our generous patent-term-adjustment (PTA) scheme means that the term will keep being extended one day for each day in prosecution. For professionally prosecuted patents, the US patent term has largely reverted to one that is once-again based upon the patent issue date rather than the filing date.