The average US patent issues about 3 ½ years after filing. The bulk of that time can be assigned to the initial examination queue. When USPTO officials refer to the “backlog” of patent applications awaiting examination, they are typically referring to the 600,000 or so applications that have not yet received any substantive consideration. For any given patent application, the backlog delay ends when a patent examiner issues a first action on the merits (FAOM). In the vast majority of utility applications, that first action is an initial non-final rejection of the originally filed (or preliminarily amended) claims. However, in a small percentage of cases the first action is a notice of allowance.

Based upon USPTO reports in the Official Gazette, I created the following chart considers the timeline for receiving first-actions across the various technology centers and art-units within the USPTO. 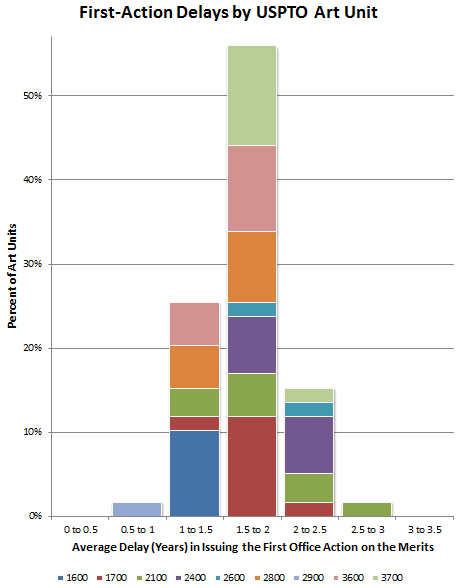 The chart above is a histogram that graphically represent the time from filing to first-action for each technology center and art unit. More particularly, it reports on the pendency of applications at FOAM for each art unit averaged over the months of June, July, and August 2012. You’ll note that only one art-unit has an average time-to-first-action of less than one year. That art unit is something of a cheat because it is the single Design Patent art unit (2900). As I have noted before, the USPTO’s examination of design patents is roughly equivalent to no substantive examination on prior art grounds. The second quickest art unit is 1660 – again a cheat because it is the unit responsible for plant patents. The slowest art unit here is 2190 (data processing). I should note that the “art unit” level that I discuss here are actually grouped by tens such that 2190 is a considered a single art unit for my purposes even though it includes art units 2192-2196.

One focus of the PTO under Director David Kappos and PTO Commissioner Peggy Focarino has been to focus on outliers within the organization and shift resources in order to bring all art units within a tighter sphere of activity. Thus, one of the PTO’s initiatives has focused on ensuring that all very old cases have received at least one office action on the merits. The PTO recently completed its second round of its COPA project (Clearing the Oldest Patent Applications 2.0). In each round, the Office has set a filing date cutoff and pushed examiners to ensure that all applications filed prior to that date had actually been examined. For COPA 2.0, the cutoff date was September 1, 2010. When the project began in at the end of September 2011 there were almost 300,000 applications filed prior to that date that had not yet received any action. At the end of the project in September 2012, there were only about 33,000 remaining in that subset of old cases.

Next time I make this chart, none of the art units should pass the 2.0 year mark for FAOM. Although not the focus of the post, the PTO offers an option for applicants to skip the queue by paying a $4,000 fee to accelerate the examination.