Prior to KSR v. Teleflex, the Federal Circuit granted significant deference to the PTO on obviousness determinations; following KSR, that deference has only increased.  Zumbiel v. Kappos represents possibly one of the more extreme examples of that deference.  This appeal is unusual, however, in that it involves substantial deference to the BPAI/PTAB's finding that a claim is nonobvious, deference that is (in the dissent's view) contrary to other aspects of the Court's holding in KSR. 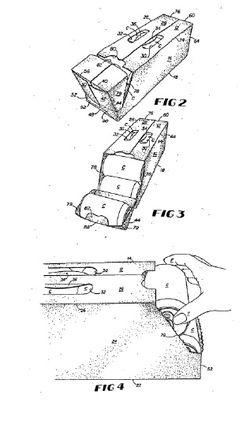 Graphic Packaging International is the assignee of Patent No. 6,715,639, which is directed to a carton or box that holds containers such as cans and bottles.  Zumbiel filed for an inter partes reexamination of the '639 patent, arguing that the claims were obvious in light of various prior art references.  The BPAI (now the PTAB) determined that some of the claims were obvious (including claim 1) and some were nonobvious (including claim 2).  Both parties appealed the adverse determinations.

1. An enclosed carton for carrying a plurality of containers in two rows, with a top row and a bottom row, said containers each having a diameter, the carton comprising:

2. The carton of claim 1, in which the finger flap is located between the first and second containers in the top row. 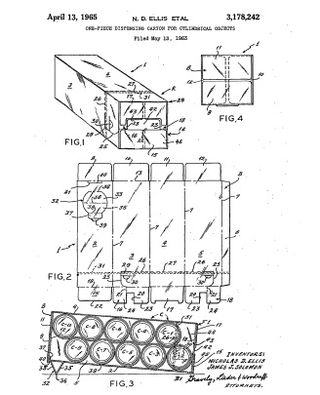 Prior Art Reference 2 (German '718) (note that there were two additional prior art references): 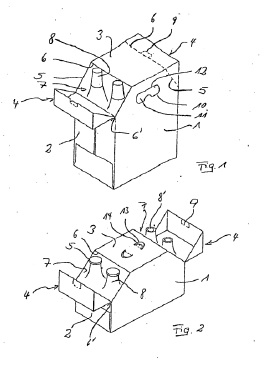 The Federal Circuit began by affirming the PTAB's determination that representative claims 1 and 13 were obvious.  Among other issues, the court employed a "predictable variations" approach to conclude that a claimed limitation would be met.  German argued that the prior art did not teach the claimed location of the finger flap; the court, however, agreed with the Board that "providing the finger opening on the top wall of the carton would be a predictable variation that enhances user convenience…and is within the skill of a person of ordinary skill in the art."  Slip Op. at 15.

The court next turned to Zumbiel's appeal of the PTAB determination that representative claim 2 was nonobvious.  The sole additional limitation added by claim 2 is that "the finger flap is located between the first and second containers in the top row."   Thus, "the dispute lies in whether the location of the finger flap between the first and second cans is obvious in light of the prior art."  Slip Op. at 20.  Applying a substantial evidence standard, the majority affirmed the Board's determination that (1) a third prior art reference did not provide the necessary teaching for moving the tear line and (2) "there was little incentive to relocate Ellis's finger flap to a position between cans in order to provide space for the fingers."  Slip Op. at 22.  Based on these findings, the majority held that claim 2 was nonobvious.

"Failing to apply KSR to the facts of this case, the Board has concluded that the invention recited in claim 2 is non-obvious. Because I believe that a common sense application of the obviousness doctrine should filter out low quality patents such as this one, I cannot join the majority in endorsing the Board’s incorrect approach on this question. Thus, with respect, I dissent."

Why is this assembly non-obvious? Because, the Board explains, the patentee has solved a difficult implementation problem, the solution to which was supposedly not obvious to box makers who lacked extraordinary skill. The secret lies in the proper positioning of the tear line. That is, according to the Board, ordinary box makers would not have put the tear line between the first two cans in the top row.

Where else could have they put it? There are just four other options: (1) above the first can, (2) above the second can, (3) in front of the first can, (4) behind the second can. The first two alternatives are just offensive to common sense: With the cans right below, there would be no room to push the flap through (the flap is positioned at the center of the tear line). The third and fourth options are not quite as illogical, but even without expertise in box making, one may intuit that they make awkward designs (the third opens too little, the fourth too much).

More importantly, however, whether some of the alternatives would work just as well or not, the patentee’s choice of tear-line-placement involves no more than the exercise of common sense in selecting one out of a finite—indeed very small—number of options. And there are no unexpected results[.]

The point here is not that the Board got the facts wrong. The point is that contrary to the Supreme Court’s instructions, an “overemphasis on the importance of [teachings of prior art]” has insulated the Board’s analysis from pragmatic and common sense considerations that are so essential to the obviousness inquiry. KSR, 550 U.S. at 419. The Board’s approach relegates one of ordinary skill to an automaton. Should this approach become commonplace, it would lower the obviousness bar and
hence hinder competition and innovation. That is why, unlike the majority, I do not see any room for deference to the Board’s determination in this case.