Guest Post by Peter Arrowsmith. Arrowsmith is a patent attorney and partner at the London based firm Cleveland IP

Amid great fanfare the European Patent Office has recently released its annual report, proclaiming another record year for the office: an all-time high in the number of filings and a 2.8% increase on the 2012 figures. These figures have been quoted widely in global media, and they create a positive impression about innovation and the success of the European patent system. 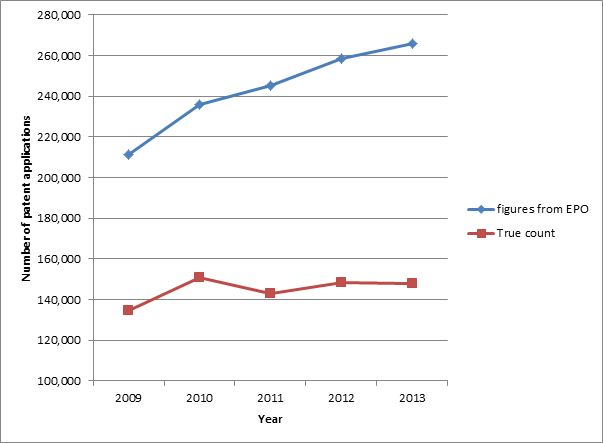 The President of the EPO blogged about the statistics on 12 March 2014, saying: “The filing figures for 2013 confirm the trends of the past few years, with an overall increase (266 000 filings, +2.8% versus 2012) resulting once more in an all-time high”. Although not technically incorrect, this statement from the President is, at best, misleading. At worst the EPO are engaging in a wilful misrepresentation of the facts.

Of course, the EPO has an interest in promoting its own role in stimulating innovation. Therefore, it is not surprising that the organisation attempts to put a positive spin on facts. However, it is troubling when this spin is relied upon by governments, industry and individuals when it comes to important decisions on the patent system.