Guest Post by Ruben Jacobo-Rubio.  I asked Jacobo-Rubio to write a guest post on his recent article (along with John Turner and Jonathan Williams) on estimating the valuation of Paragraph IV patent litigation.  The basic results here are that brand firms value deterring entry by an order of magnitude more than generic firms value the right to entry.  That economic result helps to explain the incentive for reverse payments. The full paper is available here: http://ssrn.com/abstract=2481908.

The 1984 Hatch-Waxman Act attempts to strike a balance between promoting innovation of new brand drugs and facilitating generic entry. One of its key provisions, the Paragraph (iv) Abbreviated New Drug Application (ANDA) certification process, creates a specific role for patent litigation in striking this balance. Specifically, the US Food and Drug Administration (FDA) permits generic firms to rely on brand-firm data on safety and efficacy in seeking approval to sell copies of brand drugs, but does not grant entry unless the generic firm successfully challenges all relevant brand-firm patents. As a reward, the first successful generic challenger receives a 180-day marketing exclusivity upon approval of its ANDA (iv). Effectively, the Paragraph (iv) ANDA process seeks an average level of competition, where early entry occurs against weaker patents that do not hold up in court and later entry occurs against stronger patents (Hemphill 2006).

In recent years, however, brand and generic firms have settled Paragraph (iv) litigations out of court with increasing frequency (FTC 2010). Such settlements often involve delayed generic entry and some form of payment from the brand firm to the generic. Economic theory suggests such settlements may be anti-competitive.

In order to inform the courts and stakeholders at large, we study such patent challenges. Counting only the first challenge, and restricting further attention to cases where first-time entry in the entire molecule market is at stake, we collect a sample of 93 cases litigated during 1988-2012. We begin our data capture by using all patents ever listed for approved drugs in the FDA Orange Book since the beginning of the Act. Next, we do an extensive search for lawsuits, first by using all of these patents, a second search using drug names, and a last search using firm names.

After our extensive data capture, we also develop a novel framework, using an event study of Paragraph (iv) litigation decisions and the probabilistic nature of such decisions, to identify key aspects of the distribution of surplus in the US pharmaceutical industry during the Hatch-Waxman era. We assume that the Efficient Market Hypothesis holds; that is, the stock prices of pharmaceutical firms incorporate all available information about firm value. Thus, when there is a decision in a Paragraph (iv) case, investors price the effect of that decision into their valuation of the firm. For example, the two figures below show the raw effects of decisions on brand and generic firm values. The effects are large, timed just after district-court decisions, and move in predicted directions. This gives us confidence in the event-study approach. We use standard event-study techniques to identify cumulative abnormal returns (CARs) from these decisions. 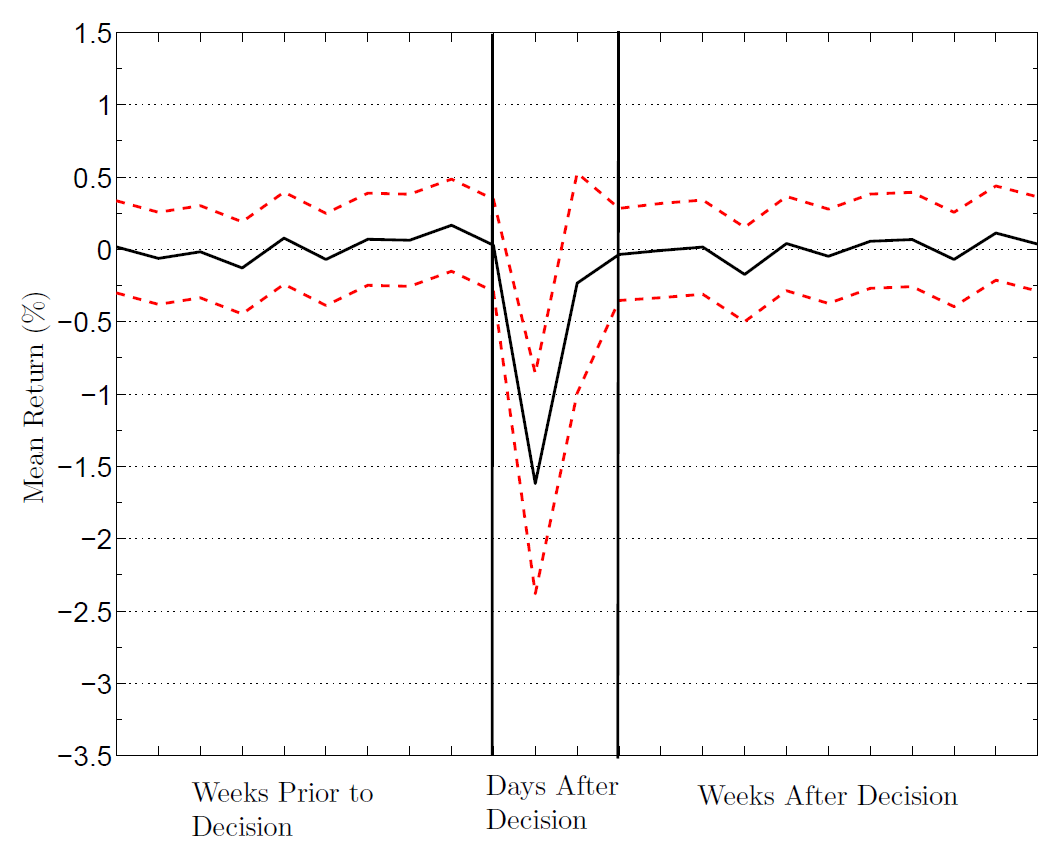 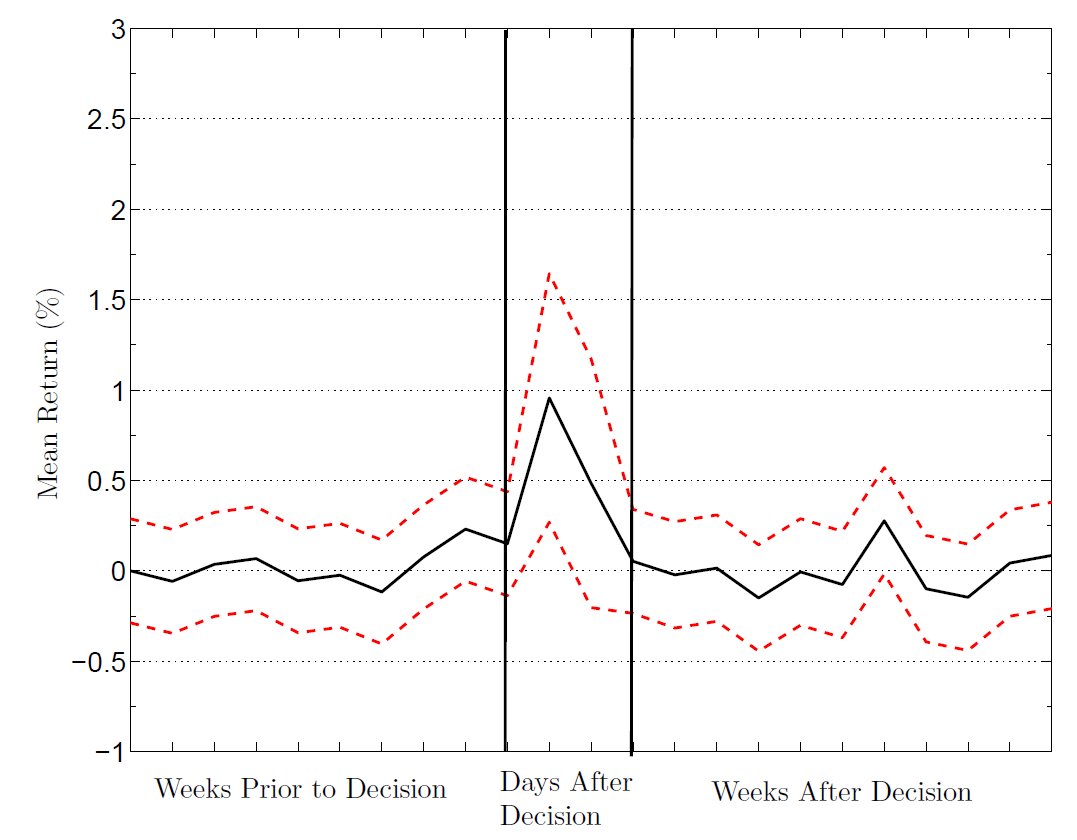 The CARs and other firm information are insufficient for identifying firms’ stakes in the case, for two reasons. First, investors expect Paragraph (iv) challenges to succeed with some probability. Second, district-court decisions are sometimes reversed on appeal. Hence, the change in market value from a district-court decision reflects a change in the probability of an ultimately successful Paragraph (iv) challenge. It does not pin down the difference in firm value between an ultimate win and an ultimate loss. To identify this latter difference—the value of deterrence for the brand and the value of entry for the generic—we weight the estimated change in the firm’s stock-market value from the event study, using formulas incorporating estimates of the probabilities of brand wins and of the probabilities of appellate reversals.

We find that brand firms value deterring entry, on average, at $4.6 billion. In contrast, generic firms value the right to enter at $236.8 million dollars (all values in 2010 dollars). Hence, the value of entry is only five percent of the value of deterrence. This gap suggests that, by settling their disputes, firms would realize sizable additional surpluses. Indeed, we estimate the average bargaining surplus to be about $2 billion per Paragraph (iv) case. This estimate represents a lower bound for the additional consumer surplus realized by permitting patent challenges under the Paragraph (iv) ANDA process, versus blocking entry for the life of the brand firm’s patents.

When we divide our sample into cases before and after the 2002 Schering-Plough decision, our estimates show that for cases decided after Schering-Plough, the ex ante probability of an ultimate brand victory is 60%, versus just 40% for earlier cases. In addition, the average value of deterrence falls 60% after Schering-Plough, from about $8.8 billion to about $3.5 billion, while the average value of entry falls nearly 67%, from $532.0 million to $173.5 million. The average bargaining surplus falls from about $4.9 billion to about $1.3 billion, a 73% decrease.

The courts have yet to clearly delineate the antitrust implications of reverse payments, but the Supreme Court has made an important step. In a 5-to-3 decision on June 17, 2013 in FTC vs. Actavis et al. (133 US 2223 [2013]), the Court instituted a “rule of reason” for courts to apply to such cases (Hovenkamp). They instructed the 11th Circuit Court of Appeals to hear Federal Trade Commission (FTC) antitrust arguments in the Actavis case, and paved the way for the FTC to make such arguments in other cases.

We hope our study sheds light on the economics of these cases.