Since the new procedure launched in 2011, third parties have filed more than two thousand requests for Inter Partes Review. 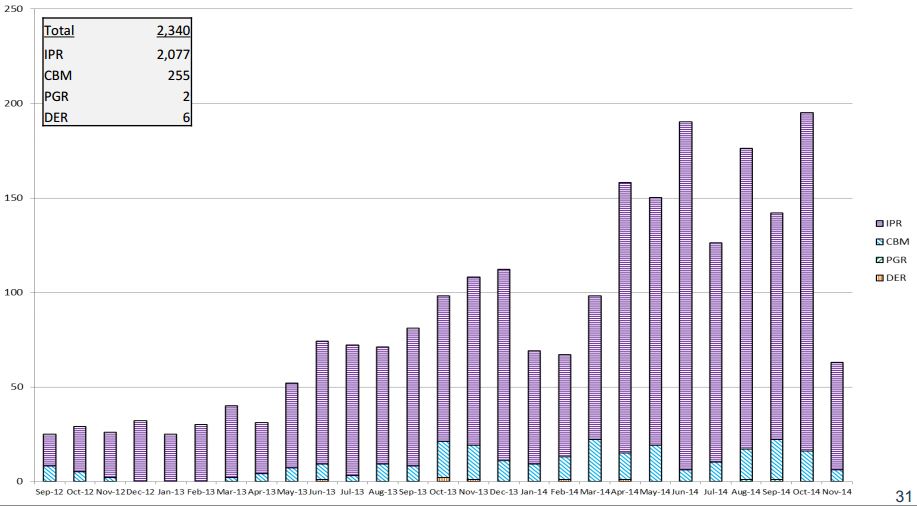 In their new University of Chicago Law Review essay, Professor Brian Love and Shawn Ambwani explore some of the results from these past two years. See Inter Partes Review: An Early Look at the Numbers, 81 U Chi L Rev Dialogue 93 (2014) [Essay].

Love, who tends to favor a strong post-issuance review regime, suggests that (based upon the initial numbers) the regime is doing its job:

Though it would be premature to make sweeping claims about IPR at this time, so far IPR appears to be a powerful shield for those accused of patent infringement (and those who anticipate that they may soon be). Compared to requests for inter partes reexamination, petitions for IPR are currently granted at a similar rate, but once instituted, they result in the elimination of every challenged claim about twice as often, reach a final decision almost twice as quickly, and make accused infringers almost twice as likely to win motions to stay co-pending litigation. In its attempt to create a formidable avenue for administratively challenging issued patents, Congress appears to have hit the mark—but only time will tell for sure.

Looking particularly at NPEs, the article reports that IPR-challenges of patents being elsewhere asserted by NPE are more likely to be instituted (as compared with the population), but less likely to result in cancellation of claims.

Over the next year, the number of results will grow tremendously and we will have a better understanding of the process and its merits. In addition, I suspect that the results will vary over time as Office hones its approach and the composition and leadership of the PTAB changes.