Over the past few months, I have heard numerous comments from folks about the perception that patents – or at least, enforcement of patents – is in decline.  Major substantive decisions by the Supreme Court – in Mayo, Alice, Nautilus, and Octane Fitness – have provided new tools for patent challengers to draw upon in infringement suits, and inter partes review has become an almost automatic procedure.   So far, the empirical evidence has supported this perception.  Last month, Dennis wrote about Lex Machina recent report on numbers of new patent case filings, which revealed a substantial drop in patent case filings over the past few months and a 40% decrease in numbers of filings in September 2014 as compared to September 2013.  Edit: yesterday Brian Howard of Lex Machina posted an update with October data showing a slight uptick over September.

Case filings tend to be highly stochastic, however, and a case that’s filed one day could be terminated the next or live on for quite a while.  To take another look at the state of patent litigation, I wanted to see whether there are changes in numbers of pending cases.  If cases are terminating faster than new cases are being filed, then the number of pending cases would drop.  On the other hand, if despite the drop in new filings the termination rate is also down, then the number of pending cases would remain stable or even go up.  My methodology is at the end of this post, but the bottom line is that the below chart reports the number of patent cases that are pending as of the first of each month using Lex Machina as my database. 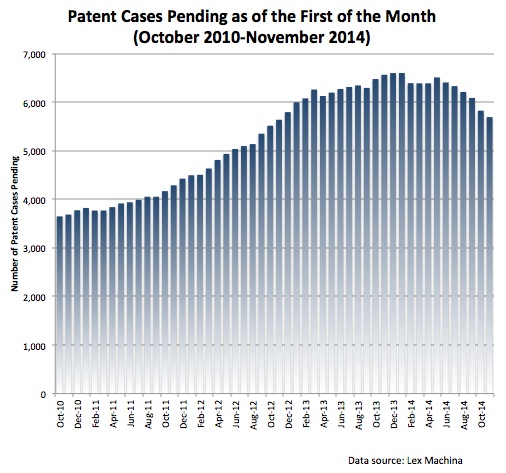 The below chart shows the deltas from the above chart; in other words, how big the positive or negative change was from the previous month. 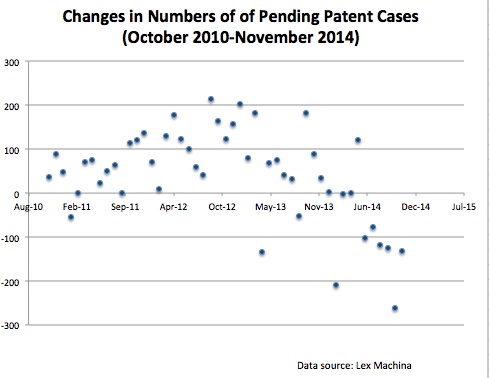 These charts are consistent with the conclusion that the number of patent litigations is indeed in a declining state, although it’s worth observing that the number of pending cases is still well above what it was as of October 2010.  Of course, one important piece of context is the anti-joinder provisions of the AIA, which led to at least some of the increase after September 2011.  If anyone has ideas for parsing these out (short of manual review), I’d be interested in hearing them. And this data doesn’t tell us anything about the quality of the patent litigation.

In addition to the decline in pending cases, I also thought it would be interesting to consider these numbers in contrast with the numbers of new applications, which, as the below chart indicates, do not exhibit a similar decline.  (Note that I set the vertical axis to start at 20,000 in order to improve readability).  One explanation is that it takes longer to shift out of application filing mode than it does to shut down a litigation.  That said, it’s also possible that companies continue to file patents based on the belief that patent law is like a pendulum and perhaps it will swing back in the other direction.  A third possibility is that the real value of patents lies not in their enforcement value, but in other areas: in signalling, in incentivizing employees, or in defensive publication. 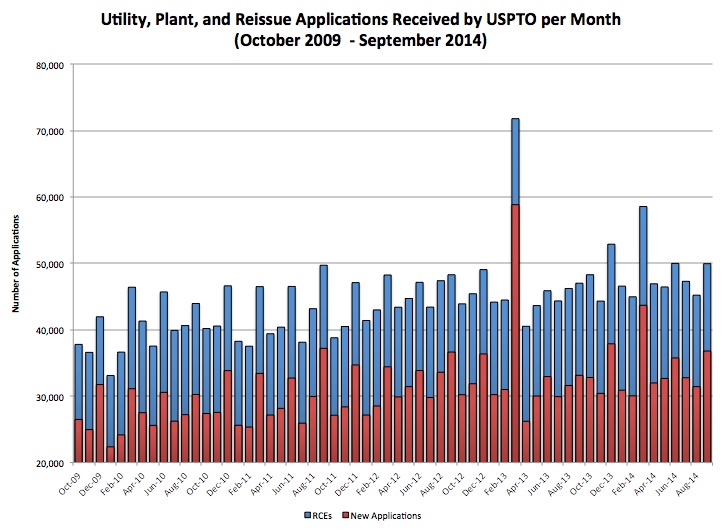 Methodology: For the first two charts, go to the “Cases” tab on Lex Machina.  Select “Patent” under “Case Type.”  Under “Filed On,” choose FROM 2000-01-01 TO YEAR-MONTH-01.  Run the search on a monthly basis (i.e.: as of the first of the month).  In addition, run a second search adding the TERMINATED “TO” field using the same YEAR-MONTH-01 dates.  Record those numbers as well.  To obtain the numbers of open cases as of each date, subtract the “Terminated” cases from the cases filed to that date.

For the second charts, the data is obtained from the Patent Dashboard (which appears to be very unstable at the present time and works only intermittently for me).  I used the downloadable excel file.  Also, as Chris Cotropia pointed out to me, pure continuations are included in the “new application” portion, and these are more like RCEs than new applications, or divisionals or CIPs.

Thanks to my research assistant, Alex Lodge, for help in collecting the Lex Machina data.

Edit: Anon observed that RCEs looked fairly constant and asked about a flipped graph.  Here is the graph with RCEs on the bottom. 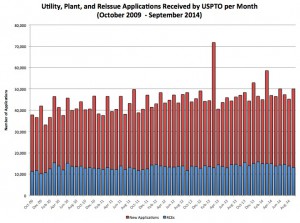