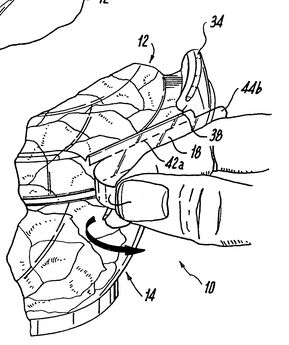 In this claim construction case, the Federal Circuit has reversed in favor of the patentee – finding that the district court improperly limited the claims to a specific embodiment. Here, the patents at issue are directed toward tamper-resistant food packaging. The idea behind the invention is easy to see from the drawings. A plastic lid connected to the plastic base by a perforated strip. The claims identify this perforated portion as a “frangible section” and the district court interpreted that language to mean “a removable tear strip, delimited by at least two severable score lines.” The result of that construction was that the accused EasyPak containers didn’t infringe.

On appeal, the Federal Circuit held that the lower court improperly narrowed the construction. The district court had offered the prosecution history as a reason for limiting the definition to the particular embodiment. However, the appellate court (reviewing this intrinsic evidence de novo) found the district court’s conclusions of the file wrapper “inaccurate” and noted that the specification included an embodiment with a single score line.

Judge Newman offered the Federal Circuit’s opinion that leads me to the conclusion that nothing-much has changed in the area of claim construction following Teva v. Sandoz, 135 S.Ct. 831 (2015).

In its pending petition for writ of certiorari in MobileMedia Ideas v. Apple, MobleMedia asks a number of follow-on questions:

1. Did the … Federal Circuit violate due process by summarily reversing a patent infringement judgment based upon a new and unprompted claim construction without remand to the district court in denial of Petitioner’s right to present evidence at trial and fully and fairly litigate the matter of infringement for the first time based on the new construction?

2. What standard should apply to denying remand for trial on a new claim construction used by the Federal Circuit to summarily reverse a patent infringement judgment?

3. Has the Federal Circuit effectively rendered Markman hearings and rulings meaningless by creating an unworkable, burdensome and judicially inefficient precedent that will require plaintiffs to present evidence at trial of every imaginable claim construction?