Nordock’s asserted design patent covers the ornamental design of a lip and hinge plate for a dock leveler. (U.S. Patent No. D579,754). The lever is designed to be attached to a truck loading and can then be adjusted to provide a smoother linkage between the dock and the truck being loaded/unloaded. As a design patent, the patentee does not claim a new and useful invention, but rather the “ornamental design” as shown in the figure below. 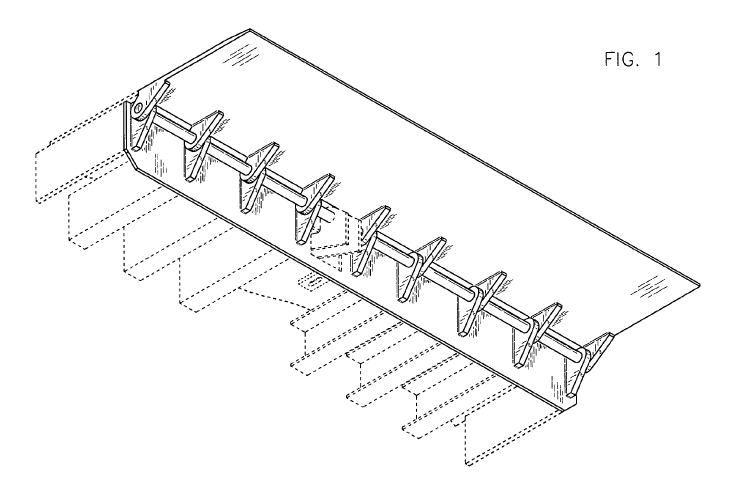 Disgorging all of the infringer’s profits: A jury sided with the patentee on infringement and validity, but awarded only $46,000 in reasonable royalty damages. On appeal, the Federal Circuit vacated – finding that the district court had improperly calculated the profit-disgorgement damages.

A design patent holder may seek damages under the standard patent damages statute 35 U.S.C. 284 that sets a floor for damages as “a reasonable royalty for the use made of the invention by the infringer.” As an alternative, the patentee can collect damages under the design-patent-damages provision codified in 35 U.S.C. 289. Under Section 289, an infringer is “be liable to the owner to the extent of his total profit, but not less than $250.” To be clear, when the statute speaks of “his total profits” – that refers to the total profits of the infringer. Opining on the statute, the Federal Circuit has written that § 289 requires “the disgorgement of the infringers’ profits to the patent holder, such that the infringers retain no profit from their wrong.” Nike Inc. v. Wal-Mart Stores, Inc., 138 F.3d 1437 (Fed. Cir. 1998). The Federal Circuit has ruled that a patentee can collect either of these damages theories, but not both. Catalina Lighting, Inc. v. Lamps Plus, Inc., 295 F.3d 1277 (Fed. Cir. 2002). That result is also demanded by the statutory language that “[n]othing in this section shall prevent, lessen, or impeach any other remedy which an owner of an infringed patent has under the provisions of this title, but he shall not twice recover the profit made from the infringement.”

At trial, the district court forced an apportionment of profits – requiring a calculation the infringer’s profits associated with the lip and hinge plate even though the infringer sold the dock leveler with the plate as an entire unit. As it recently did in Apple, the Federal Circuit here rejects that approach:

[W]e recently reiterated that apportioning profits in the context of design patent infringement is not appropriate, and that “Section 289 explicitly authorizes the award of total profit from the article of manufacture bearing the patented design.” Apple Inc. v. Samsung Elecs. Co., 786 F.3d 983 (Fed. Cir. 2015) (rejecting Samsung’s attempt to limit the profits awarded to the “portion of the product as sold that incorporates or embodies the subject matter of the patent”); see also Nike, (discussing the legislative history of § 289 and Congress’s decision to remove “the need to apportion the infringer’s profits between the patented design and the article bearing the design”).

Based upon this error, the Federal Circuit ordered a new trial on damages.

Is it Functional? Preserving the Appeal: There is no question that the design patent here covers a functional invention. The question raised by the infringer’s cross-appeal is whether it is impermissibly functional such that the design patent is invalid. However, in the appeal, the Federal Circuit ruled that argument to be waived because Systems’ counsel “failed to renew the motion for JMOL as to validity with sufficient particularity.” Here, defendant’s counsel gave a general motion following the verdict stating that “as a routine matter whatever motions we made during the trial, JMOL and so forth, we would renew those motions to the extent that they are necessary. . . . Everything we made we renew. I’m not sure what that is, but just for the record whatever we said before.” The patentee did not file any further particular post-verdict motions with respect to validity and – as such – the Federal Circuit ruled that the general post-verdict motion was insufficient to preserve the infringer’s rights.

Is it Functional? The Test: As an alternative judgment, the court also ruled the jury had been presented with sufficient evidence to support a not-impermissibly-functional verdict.

A design patent will be deemed invalid if the claimed design “as a whole, is dictated by functionality.” Factors often considered in the functionality analysis include:

High Point Design LLC v. Buyers Direct, Inc., 730 F.3d 1301 (Fed. Cir. 2013) (these factors “may help”). At trial, the jury heard testimony from the patentee indicating that the design was intended to be distinctive and ornamental, that the claimed plate is not necessary to perform the dock leveling function, and that other designs are available to achieve the same utilitarian purpose. “On this record, there was substantial evidence from which a jury could conclude that the claimed design is not dictated by function.”

There has been some outcry regarding the relatively large disgorgement profits without any proof of an innovative leap or a business impact of the design. However, up to now there have been no congressional proposals on point.  In 1946, Congress eliminated equitable disgorgement from utility patent doctrine. (as interpreted by Aro II (1964)).

The pending design patent legislation would excuse spare-auto-parts manufacturers and sellers from liability.