As Patently-O has described in detail (e.g., here and here), patent litigation rates have been in flux over the last several years. First, in 2010, rates nominally went up because of false marking suits. Then, in 2011, following passage of the America Invents Act (AIA), patent litigation rates appeared to increase (and the media made much ado over this). Yet, the only thing that changed immediately after the AIA was how we counted patent litigation numbers because of new joinder rules. Indeed, the AIA’s joinder rules actually lowered total defendant counts a bit. Next came inter partes review (IPR) and covered business method (CBM) review, which appear to have substantially decreased litigation rates in 2013 and 2014. Then came Alice Corp. v. CLS Bank and its progeny, which some have claimed decreased litigation rates throughout 2014. And now rates seem to be back up in 2015—why, nobody is sure.

To further understand the drivers of patent litigation, Alan Marco (Chief Economist at the USPTO) and the two of us recently conducted the first rigorous study of the effects of the economy as a whole (the “macroeconomy”) on patent litigation rates over the period 1970-2009 (we stopped at 2009 to avoid the counting mess I just described). The study will be published this month in the Journal of Empirical Legal Studies (a draft is available here). 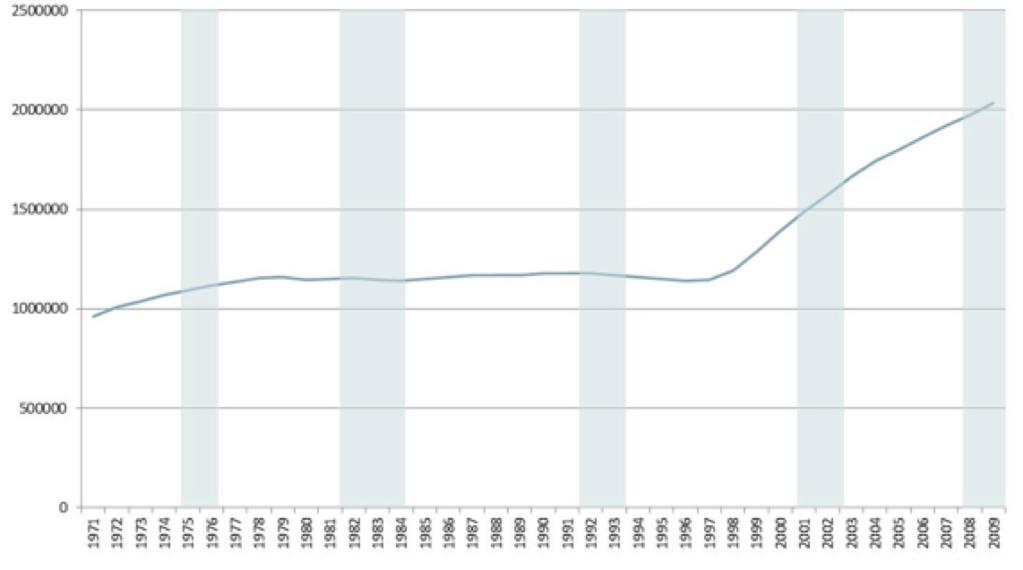 Indeed, although many have noted that the litigation rates per issued patent have been fairly stable, Figure 2 below shows that the litigation rates per in-force patent have risen quite dramatically since the early- to mid-1990s (at least from 1970s rates—Ron Katznelson has argued that rates per in-force patent in the 1920s to the mid-1930s are fairly comparable to the recent rates, at least through the 2000s). 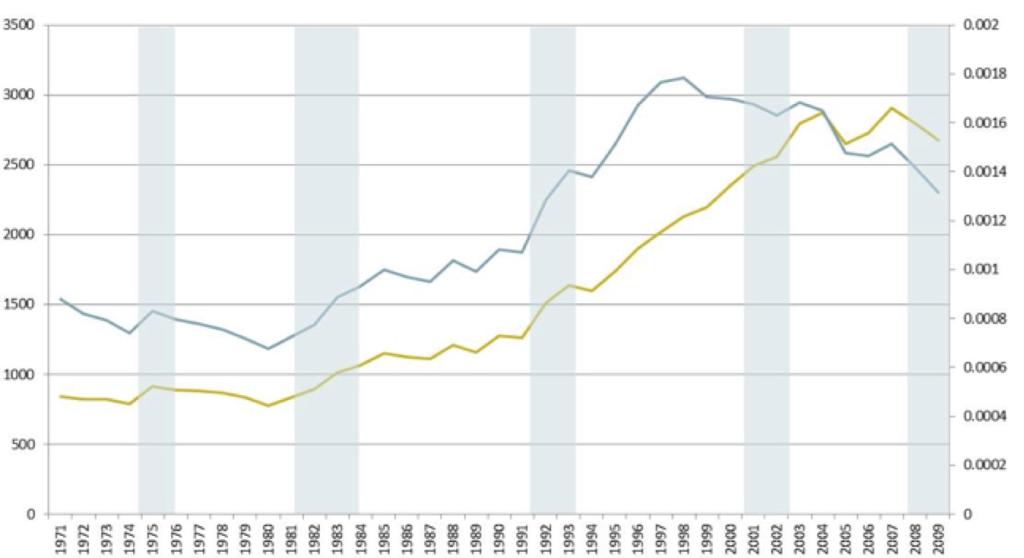 We then performed numerous time-series regressions against important macroeconomic variables like GDP, R & D spending, interest rates, and related factors, controlling for in-force patents and other key variables. Our major findings (over the last 20-25 years) are as follows:

We explain the first finding on a “substitution” theory—namely, when selling products and services is highly profitable, companies and investors are less concerned about earning revenue from patent litigation. We speculate that our second finding is driven by the increasing reliance by plaintiffs on external funding. Indeed, the availability of credit has only played a significant role in patent litigation rates since roughly the mid-1990s, when licensing-driven litigation began to rise—first by practicing entities such as IBM and Texas Instruments and, later, by non-practicing entities (NPEs).

Over the last five years, the mean U.S. real GDP growth rate has been about 2-3% per year. Ignoring other factors, and assuming our model applies on a going forward basis since 2009, this increase in productivity has very roughly amounted to a 6-9% decrease in annual patent litigation counts over the same period. In general, it is likely that a sizeable portion of the decrease in patent litigation rates over the last several years has been not merely due to the rise of IPRs and CBMs, and the issuance of Alice Corp. v. CLS Bank, but also to the economy as a whole. So the next time the economy worsens, if credit remains relatively available, all other factors equal, it is likely that patent litigation rates will rise significantly—not by a huge amount, but enough to notice. Whether the current increase in patent litigation is somehow related to a declining macroeconomy, only time will tell.

Please note that the views expressed herein solely express our personal views and do not express the views of the U.S. Patent & Trademark Office.