One of my current projects is to create a transparent and user-friendly database of information about Federal Circuit decisions–particularly, its patent law decisions–with a structure that’s useful for empirical researchers and other people who write about the court. If folks are going to throw around numbers about the court, my hope is that they have some grounding in a relatively clear and consistent methodology.

My goal in creating this database is to focus on information that’s of interest to researchers and commentators rather than to create another database for online legal research.  While Westlaw, Lexis, and the various free alternatives are great tools for finding key cases, there are lots of problems with using them for empirical research, not the least of which is the periodically changing nature of their interfaces–changes that make replication of older studies difficult. Also, since their focus is on helping practitioners do legal research, commercial databases tend not to collect and record data in a way that’s useful for empirical work.

I’ve used components of the dataset before, including in PatentlyO posts and an article on dissents at the Federal Circuit, and others have used it in their own projects (Crouch; Gugliuzza & Lemley).  Currently, coded data includes basic information about each decision arising from the district courts and PTO back to 2007, with written opinions going back to 2004.   Fields include information such as document type, precedential status (and Rule 36’s!), panel members, dissents and concurrences, and opinion authors.  I’m interested in crowdsourcing additional fields to code once I’ve published the dataset. Everything’s being done in-house at Iowa–even the R Shiny app that powers the user interface was coded as a project for a graduate statistics consulting class under the instruction of Rhonda DeCook, and my research assistant Louis Constantinou has been a huge help in getting this project finally done.

I’ll be rolling out the web-based portal in the near future, but in the meantime I’ve had requests for some of the data–particularly an update on the court’s use of Rule 36 summary affirmances.   Those charts are below.  The basic methodology employed in creating these charts is described in my earlier post on Federal Circuit appeals and decisions.

Finally, since the purpose in creating this database is to share it, students or other researchers who are interested in drawing from it for their own work are welcome to email me before it goes public.  Basically, it’s a starting point that’s flexible enough to allow future researchers to do their own coding without having to redo basic information about each decision. 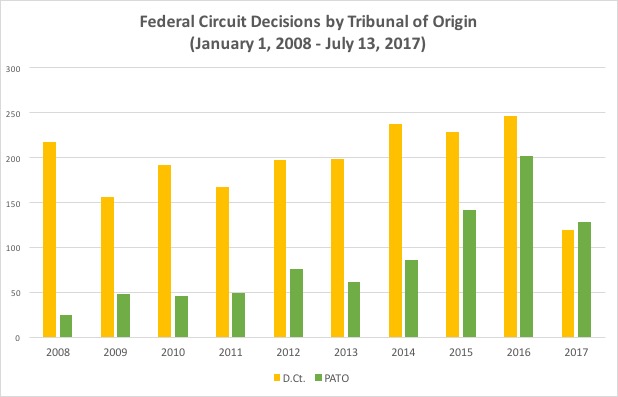 The following two charts are updated versions of figures from my post from last summer on types of Federal Circuit decisions. 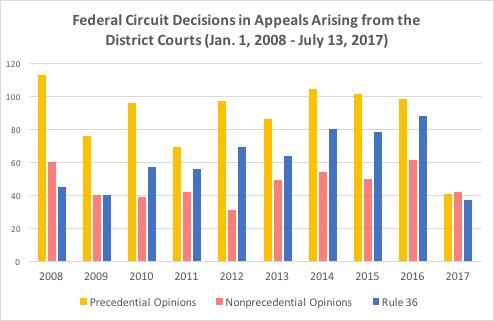 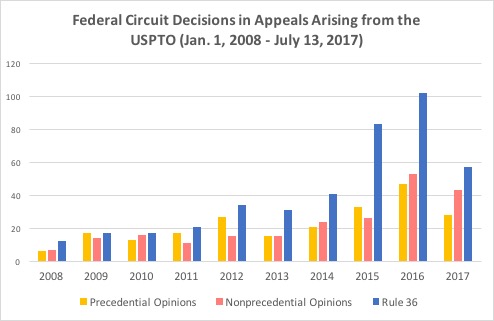