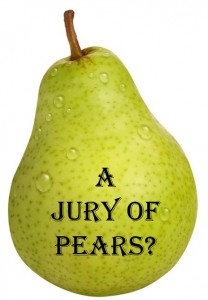 In a short opinion, the Federal Circuit has ruled that the factual basis an attorney fee award need not be decided by a jury — affirming a $4 million fee award that followed a jury trial on the sole issue of whether the plaintiff (AIA) owned the asserted patents. U.S. Patent Nos. 5,455,169 and 7,538,258.

In Suits at common law, where the value in controversy shall exceed twenty dollars, the right of trial by jury shall be preserved, and no fact tried by a jury, shall be otherwise re-examined in any Court of the United States, than according to the rules of the common law.

The right to a jury of peers in civil cases is one of those fundamental principles designed to uphold the rights of property and contract but keep them in balance with community principles and values.  The limitation of the amendment is that it only applies to “Suits at common law.” The “common law” limitation implicitly refers to the distinction between “legal” and “equitable” suits that do not require a jury trial.  Further, the Constitution indicates that the right to jury trial shall be “preserved.”  This suggests that issues which were decided by judges (rather than juries) at common law are not transformed into jury questions by the Constitution. Rather, the provision appears designed to maintain the status quo requirements

The Constitution reference to “Suits” makes historic sense when suits were either filed before a common law court or a court of equity.  At the Federal level, those courts are merged and so we now look to particular issues within each lawsuit to determine whether those issues need be determined by a jury.  Thus, for instance, a case involving a patentee’s request for reasonable royalty damages and injunctive relief, the damages would require a jury (if requested) as an issue traditionally decided by common law courts while injunctive relief is an equitable question that does not require a jury.

Here, the question before the courts was whether an attorney fee award under Section 215 requires a jury. For its analysis, the court first looked historically and determined that common law judges (rather than juries) decided the fee award issue.  The Federal Circuit’s conclusion is that this “implies that attorney’s fees generally do not involve legal rights.”  I would draw a similar but slightly distinct conclusion – that there was no right to a jury to be “preserved” regarding the issue of attorney fees. Further, the appellate panel went on to look at the remedy – and found it is properly classified as equitable because it raises “issues collateral to and separate from the decision on the merits.” (quoting Budinich v. Becton Dickinson & Co., 486 U.S. 196(1988)).

With its conclusion that attorney fees under 35 U.S.C. § 285 are “properly characterized as an equitable remedy,” there is no need for a jury determination.

A few notes here – Yes, you heard that right, a $4 million fee award for a 12-witness jury trial.  Avid had requested about $7 million. Yes, discovery and lawyering is expensive, but the discovery in the case was “targeted” toward only the ownership issue (that did admittedly involve allegation of conspiracy).

This appears to be a super fascinating issue that would extend our knowledge of the ownership process when inventors assign their future invention rights.  Unfortunately, the Jury Verdict is SEALED, and the Federal Circuit’s decision on the merits of the case was issued as a R.36 Affirmance without Opinion.

An important element of the original district court decision here (that was affirmed without opinion) points out a Florida State Regulation that “An invention which is made in the field or discipline in which the employee is employed by the University or by using University support is the property of the University…” R. 6C4–10.012(3)(c) (emphasis added).  To be clear, this regulation is not a “contract” with the future inventor but instead a regulation in the Florida code that identifies ownership of the patent right — seemingly in conflict with the statement in Stanford v. Roche that “Since 1790, the patent law has operated on the premise that rights in an invention belong to the inventor.”

35 thoughts on “Right to Jury Trial: Not for Attorney Fees”