In a new decision, the Federal Circuit has ruled that the PTAB erred in its inherency analysis, but ultimately affirmed the claim cancellation after finding the error harmless. Southwire v. Cerro Wire (Fed. Cir. 2017) [Southwire]

Back in 2012, Cerro Wire filed an inter partes reexamination request against Southwire’s U.S. Patent No. 7,557,301.  The slow process apparent here is one reason why this type of reexamination was phased-out and replaced by the more aggressive AIA-Trials.  With reexaminations, the issued patent is sent first to a patent examiner for consideration with any decision then being appealable to the PTAB and eventually to the Federal Circuit.

The prior art is our primary source of evidence as to whether a patent claims a new invention.  The best evidence comes from express teachings in the prior art.  However, the courts also allow for teachings to be derived from the prior art so long as they are “inherent” within the evidence.

Example: Prior art disclosing a automobile wheel might not expressly state that the wheel is made of molecules, but that teaching would be seen as inherent.  Thus, an invention directed toward a “wheel comprising molecules” would be anticipated by the reference.

Here, the patented method is directed toward making electric cable.  Lubricant is added to reduce friction and allow the wires to be more easily pulled into the sheath.  The claims require that the lubricant result in “at least about a 30% reduction” in pulling force. (Note here that the claim is written in Jepson form.) 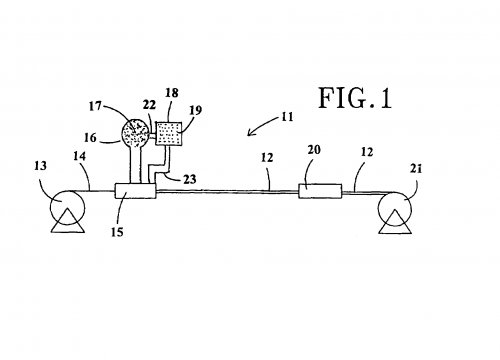 In its decision, the PTAB (board) used inherency in a particular way – finding first that it would have been obvious to combine the prior art to use the method described;  and then finding that the 30% reduction would have inherently resulted from the combination.  On appeal, the Federal Circuit rejected that analysis – holding that “the Board cited no evidence that a reduction of 30% in the pulling force would necessarily result from the claimed process, which contains no steps that ensure such reduction.”  Rather, as the patentee argued, the 30% reduction serves as a guide for selecting the particular lubricants and arrangements.

We have an error, but as I mentioned, it turns out to be harmless because the Board “made the necessary underlying factual findings to support an obviousness determination.”

In particular, the prior art teaches the “substantially identical” process as that claimed with no claim element differing “in any material way” from the prior art, and the prior art might have produced the claimed “30% reduction” in pulling force.  Keeping that in mind, the court looked back to the CCPA’s 1977 In re Best holding:

In re Best, 562 F.2d 1252 (C.C.P.A. 1977). In Best, the court noted that inherency would be properly used in this situation for an anticipation decision, but that for obviousness, the PTO can simply find a prima facie obviousness case.

39 thoughts on “Functional Limitation Not Inherent, but Still Obvious”